» Toegang tot de volledige tekst krijgen
The present study utilized a fear potentiated startle paradigm to examine amygdala function in individuals with autism spectrum disorder. Two competing hypotheses regarding amygdala dysfunction in autism have been proposed: (1) The amygdala is under-responsive, in which case it would be predicted that, in a fear potentiated startle experiment, individuals with autism would exhibit decreased fear conditioning and/or potentiation, and (2) The amygdala is over responsive, in which case an exaggerated potentiation of the startle response would be predicted. Fourteen adolescents and adults diagnosed with autism spectrum disorder and 14 age, gender, IQ, and anxiety level-matched typical adolescents and adults participated. Both participants with autism and typical participants potentiated the startle response following fear conditioning and no group differences in the latency or amplitude of the potentiated startle response were found. These results suggest that this aspect of amygdala function, namely fear conditioning and potentiation of the startle response, is intact in individuals with autism. 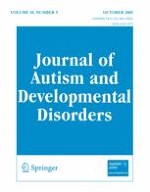 The Effect of Concurrent Task Load on Stimulus Over-Selectivity