The analysis sample included 186 individuals with SUDs randomized to MBRP or relapse prevention (RP) as an aftercare treatment. Outcomes included number of heavy drinking days and drug use days at the 12-month follow-up.

There were no treatment moderation effects for models with heavy drinking days as the outcome (all ps > .05). Group gender composition, but not individual gender, moderated the effect of treatment condition on drug use days (p < .01). Individuals who received MBRP had significantly fewer drug use days at 12 months than those who received RP, but only among individuals in therapy groups comprising one-third or more women (p < 0.0001). Specifically, all women and men who received MBRP in groups with one third or more women were abstinent from drugs at month 12, whereas those in RP groups with one third or more women had an average of about eight drug use days at month 12 (corresponding to a large between-treatment condition effect size).

Group-based MBRP may be more efficacious than group-based RP, particularly when women compose at least one third of the therapy group. Further research is warranted on gender and group gender composition as moderators of MBRP.
vorige artikel The Mutual Support Model of Mindfulness and Character Strengths
volgende artikel Adaptation of a Mindfulness-Based Intervention for Incarcerated Young Men: a Feasibility Study 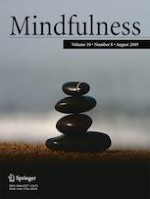 Meditation on the Breath: Mindfulness and Focused Attention

Are We Forgetting Sati? Memory and the Benefits of Mindfulness from a Non-Buddhist Viewpoint