The transmission of attitudes toward deviant behavior occurs in social contexts such as peer groups. Accordingly, individuals align their attitudes to those of friends because they want to belong to that social category or, conversely, individual attitudes influence the perception of peer attitudes. Hence, individuals self-stereotype themselves as being members of a peer group or they project their attitudes onto friends. However, it is unclear which process—self-stereotyping or social projection—is predominant in determining similarity of individual and peer attitudes toward deviant behavior. Furthermore, it is unclear whether predominance changes between early/middle adolescence and emerging adulthood. These gaps are examined with panel data on individual attitudes toward deviant behavior and perceived attitudes of individuals’ friends from a German study covering ages 14 to 20 (N = 3723; proportion of male respondents across panel waves ranges between 42 and 49%). A random intercepts cross-lagged panel model is applied to the data to estimate within-person effects in both directions, which allows to answer whether self-stereotyping or social projection is predominant and whether predominance changes across time. The results indicate that self-stereotyping is active almost entirely in adolescence and emerging adulthood. Reversed effects only occur during the transition from adolescence to emerging adulthood, signaling a developmental shift toward social projection. Thus, the influence of perceived peer attitudes toward deviant behavior on individual attitudes decreases in the phase in which adolescents develop into young adults. At the same time, individuals’ own attitudes become increasingly influential for making inferences about the attitudes of their peers. 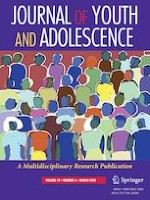 Associations between Ethnic Minority Status and Popularity in Adolescence: the role of Ethnic Classroom Composition and Aggression

Prestigious Youth are Leaders but Central Youth are Powerful: What Social Network Position Tells us About Peer Relationships

Poly-Strengths and Peer Violence Perpetration: What Strengths Can Add to Risk Factor Analyses