Anxiety disorders are the most frequently diagnosed form of psychopathology in children and often result in chronic impairment that persists into adulthood. Identifying neurobehavioral correlates of anxiety that appear relatively early in life would inform etiological models of development and allow intervention and prevention strategies to be implemented more effectively. The error-related negativity (ERN), a negative deflection in the event-related potential at fronto-central sites approximately 50 ms following the commission of errors, has been consistently found to be larger among anxious adults. The current study sought to extend these findings to even younger individuals: the ERN was elicited by a Go/NoGo task in 48 six year-old children with a clinical anxiety disorder assessed by diagnostic interview and 48 age-matched controls. In addition to child anxiety disorder, the ERN was examined in relation to maternal history of anxiety disorder, which was previously related to a smaller ERN. Anxious children were characterized by a larger (i.e., more negative) ERN and maternal history of anxiety disorder was associated with a smaller ERN. Thus, the relationship between an increased ERN and clinical anxiety is evident by age 6, and this effect appears independent from an opposing influence of maternal anxiety history on the ERN. These findings support the ERN as a promising neurobehavioral marker of anxiety, and implications are discussed. 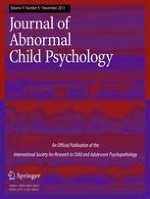 Costs and Benefits of Bullying in the Context of the Peer Group: A Three Wave Longitudinal Analysis