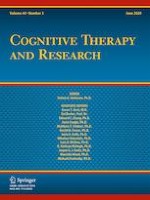 Exposure and Reactivity to Repetitive Thought in the Neuroticism–Distress Relationship

Hostility and Suicide Risk Among Veterans: The Mediating Role of Perceived Burdensomeness

Looming Cognitive Style and Its Associations with Anxiety and Depression: A Meta-analysis

Examination of the Relationship Between Attentional Biases and Body Dissatisfaction: An Eye-Tracking Study