Dysfunction in the ability to sustain, shift and broaden attention has been proposed as a mechanism of normative emotion regulation that is a common target of cognitive-behavioral therapies. Attention regulation deficits are central to generalized anxiety disorder (GAD) and may contribute to a generally rigid, avoidant, response style that produces substantial decrements in well-being and functioning. Emotion Regulation Therapy draws upon mindfulness-based regulatory skills to facilitate attentional change during an initial phase of treatment. Two studies examined task-based changes in flexibly shifting attention in response to conflicting emotional contexts and sustaining attention despite distressing emotional contexts. In Study 1, at pre-treatment, patients with GAD, as compared to controls performed significantly more poorly on an emotional conflict adaptation task (i.e., less ability to flexibly shift attention) and improved in conflict adaptation by mid-treatment (when attention regulation skills were being trained). This task-related change predicted increases in mindful observing abilities over the course of acute treatment but was not directly associated with clinical outcomes. In Study 2, a choice reaction time (RT) task was utilized to measure the ability to sustain attention by discriminating between two tones while overcoming the interference of aversive visual stimuli. At pre-treatment, participants with GAD demonstrated slower RTs (i.e., more difficulty sustaining attention on the tonal prompt) compared to controls and demonstrated more rapid RTs from pre- to mid-treatment. This improved task performance was related to clinical improvement and decreased functional impairment. RT change was also associated with greater nonreactivity towards experiences. Overall, these findings suggest that targeting mindful regulation skills improve attention regulation in individuals with GAD and may partially account for efficacious clinical outcomes throughout treatment. 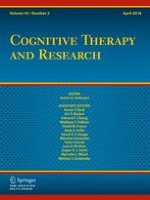 Introduction to the Special Issue on Processes of Cognitive Behavioral Therapy: Does “Necessary, But Not Sufficient” Still Capture It?

Not Just a Non-specific Factor: Moderators of the Effect of Within- and Between-Clients Alliance on Outcome in CBT

Miles to Go Before We Sleep: Advancing the Understanding of Psychotherapy by Modeling Complex Processes

When is it Effective to Focus on the Alliance? Analysis of a Within-Client Moderator