Cardiac rehabilitation (CR) is a multidisciplinary multifaceted intervention aiming at physical, psychological and social recovery of cardiac patients after a cardiac event or therapeutic intervention. Important secondary goals are to induce lifestyle changes and to improve medication adherence. Traditional indications for CR are related to coronary artery disease (CAD), including patients with myocardial infarction, angina pectoris and patients who underwent coronary artery bypass grafting or percutaneous transluminal coronary angioplasty. Previous studies showed that CR is highly effective in these patients, both in terms of improving quality of life and in reducing the risk of future events [ 1– 3]. In the last decade, it has become clear that CR is not only beneficial for CAD patients but also for patients with chronic heart failure, congenital heart disease, arrhythmias, cardiac neurosis and patients who underwent heart transplantation, valvular surgery or implantable cardioverter defibrillator (ICD) implantation [ 4– 7]. Because of this rise in referral indications and the increasing prevalence of cardiovascular patients due to ageing of our population, it is crucial that CR is widely available and well integrated in daily clinical practice.
In 2004, the Netherlands Society of Cardiology released the current CR guideline ( Richtlijn Hartrevalidatie 2004) [ 8]. Given the complexity of this guideline and the involvement of many healthcare disciplines (cardiologist, nurse/nurse practitioner, physical therapist, dietician, social worker, medical psychologist, sports/rehabilitation physician), it was decided by the CR committee that a clinical algorithm had to be developed serving to aid healthcare professionals in implementing this guideline in daily practice. This clinical algorithm ( Beslisboom Hartrevalidatie 2004) consists of a flowchart of questions on physical, psychological and social issues, using both measurement instruments (for example, the Shuttle walk test, MacNew heart disease health-related quality-of-life questionnaire [ 9, 10]) and clinical judgment. The algorithm uses this information to set individual treatment goals and to advise the clinician on the contents of the CR programme, which may consist of four different group-based treatment modalities (exercise training, education therapy, lifestyle change therapy, and relaxation/stress management), and/or individual treatment.
Concurrent with the clinical algorithm, a computerised decision support system was developed, serving to facilitate the use of the clinical algorithm. This system (cardiac rehabilitation decision support system, CARDSS) actively guides its users through the clinical algorithm, prompting for necessary information and calculating scores of questionnaires. A recent trial in a cohort of 2,787 patients from 21 centres showed that CARDSS increases the compliance with guideline-recommended therapeutic decisions [ 11]. However, this study also revealed shortcomings of the 2004 Clinical Algorithm, as illustrated by large variations in several baseline variables between hospitals, even after correction for differences in patient populations. Inter-practice variations were particularly large if assessments were based on clinical judgements rather than on clinical assessment instruments. Therefore, it was concluded that more measurement instruments are needed. Another shortcoming of the clinical algorithm was the deficiency of several items that have been shown to be relevant for CR (e.g. assessment of anxiety, depression and cardiac risk profile).
To overcome the mentioned shortcomings and deficiencies of the 2004 Clinical Algorithm and to further improve implementation of the Dutch CR guideline, the algorithm was recently updated. This article describes the process and the changes that were made and discusses its role in the development of CR in the Netherlands.

The revision of the 2004 Clinical Algorithm consisted of three phases. First, the reliability of the 2004 Clinical Algorithm was evaluated. As already mentioned, this was done by assessing inter-practice variations in the data recorded during the needs assessment procedure. In addition, cognitive, organisational and environmental barriers to guideline implementation were assessed by conducting interviews with healthcare professionals using CARDSS. The results of this study were described previously [ 12].
In the second phase, a multidisciplinary expert advisory panel was established, consisting of healthcare professionals who were involved in the development of the 2004 Dutch Cardiac Rehabilitation Guidelines. Members of this panel were instructed to select deficiencies and shortcomings needing revision from a list that was composed during the first phase. In addition, they were requested to provide specific recommendations for revision of these items based on available scientific evidence. The utility of clinical assessment instruments was evaluated by criteria developed by the Scientific Advisory Committee (SAC) of the Medical Outcomes Trust [ 13]. Finally, the expert advisory group was asked to propose new items that should be considered for inclusion in the Clinical Algorithm.
In the third phase, a guideline development group, consisting of members of all Dutch professional associations involved in CR, decided which revisions proposed by the expert advisory group were finally included in the Clinical Algorithm 2010 [ 14]. In this phase, decisions were not only based on scientific evidence but also on applicability in daily clinical practice.

Table  1 shows all shortcomings/deficiencies of the 2004 Clinical Algorithm that were selected during the revision process and the changes that were made in the 2010 version. A total of nine items were revised. Three items were changed because of new insights provided by more recent CR guidelines, and six items were revised because of significant between-centre variation of the baseline assessment data in the 2004 algorithm [ 15]. For example, after correction for differences in patient populations, the mean percentage of patients with a psychological problem ranged from 17% to 37% when assessed by clinical interview, as compared with ranging from 54% to 59% when assessed by the MacNew questionnaire. This indicates that assessment by clinical interview not only results in a larger between-centre variation but also in an underestimation and, consequently, to undertreatment of psychological problems. The latter problem also exists when looking at estimation of exercise capacity: The assessment of patients’ exercise capacities by clinical interview led to a lower percentage of patients being judged as having an insufficiency than when bicycle ergometry or incremental Shuttle walk test was used (73% vs. 84%, p < 0.01). In all revised items, subjective assessment methods (clinical experience or unstructured clinical interview) were replaced by more objective assessment tools. In addition, based on new scientific insights, the multidisciplinary expert advisory panel added four new key items to the 2010 algorithm: screening for anxiety/depression, stress, cardiovascular risk profile and alcohol consumption.
Table 1
Recommendations in the Clinical Algorithm 2004 and the revised recommendations in the Clinical Algorithm Cardiac Rehabilitation 2010 for all items in the five main domains of the needs assessment procedure

The benefit of physical activity for cardiac patients was already noted more than 200 years ago [ 16]. However, it was not until the 1960s that CR programmes were gradually implemented in clinical practice [ 17]. In 1965, the Netherlands Heart Foundation and Netherlands Society of Cardiology formed a committee on CR. At that time, the main focus of CR was on physical reconditioning and work resumption. In the early 1990s, a broader and more versatile view on CR was gradually developed. Based on these new insights, the CR committee released the first Dutch CR guideline in 1995. In addition to exercise training, the CR programme also comprised education therapy and psychoeducative prevention therapy (PEP module). In 2004, this guideline was replaced by the current Dutch CR guideline, which gives more attention to risk prevention through behavioural changes (e.g. smoking cessation, increasing physical activity, improving dietary habits) as well as to psychosocial recovery. In addition, several new diagnosis groups were included (patients with chronic heart failure, congenital heart disease, patients who underwent heart transplantation or ICD implantation and elderly patients). The number of possible treatment modalities was extended to four group-based interventions (exercise training, education therapy, lifestyle change therapy and relaxation / stress management) and, in selected cases, additional individual treatment (e.g. by psychologist or dietician). In 2008, the Netherlands Society of Cardiology instituted a project group to revise the Dutch guideline with respect to psychosocial and work-related aspects of CR (PAAHR project). It is expected that the revised guideline will be released later this year.
A general problem with guidelines for cardiovascular disease, and in particular when guidelines are complex and multidisciplinary such as in cardiac rehabilitation, is that physician adherence is often poor [ 18, 19]. This lack of adherence may be related to insufficient knowledge, the physicians’ attitude (e.g. a lack of agreement with the guideline, a lack of outcome expectancy and/or a lack of motivation) or to the presence of external barriers (e.g. lack of resources, insufficient reimbursement or organisational constraints) [ 20]. Whereas it is difficult to overcome external barriers, several strategies have been advocated to improve the physicians’ knowledge and motivation. One of the most frequently used intervention strategies is education. However, previous studies showed only moderate effects of educational outreach by experts or trained facilitators. Yet, this effect can be increased by providing feedback and reminders to professionals [ 21]. As such, clinical decision aids have been shown to be effective in improving guideline adherence, mainly by increasing knowledge, reducing the tendency to stick to previous practice and by reducing guideline complexity [ 22, 23]. Therefore, given its complex and multidisciplinary nature, CR is particularly suitable for the use of clinical decision aids such as a clinical algorithm. In addition to a cardiologist, the CR team consists of a coordinator (e.g. nurse, nurse practitioner or physician assistant), a physical therapist, a dietician, a social worker and in selected cases a medical psychologist, a sports physician and/or a rehabilitation physician. As individual patients may need different combinations of treatments from different healthcare professionals from the CR team, a clinical algorithm can be a useful and efficient tool to delegate tasks and responsibilities.
In order to be effective for improving guideline adherence, a clinical algorithm should include well-defined, non-ambiguous procedures for assessing the rehabilitation needs for individual patients. Therefore, the main focus of the present study was to include more objective measurement instruments as compared with the 2004 Clinical Algorithm. As current CR guidelines do not provide specific measurement instruments, a multidisciplinary expert advisory panel was established to elect these instruments, using specified (SAC) criteria for its evaluation [ 13]. Although this approach has been implemented successfully previously [ 24], the effect of the updating procedure on inter-practice variation of variables obtained during the needs assessment procedure, as well as on guideline adherence, is yet to be investigated. In addition to improving guideline adherence, the updated Clinical Algorithm may also serve to improve the quality of CR in the Netherlands; by registering data through a computerised decision support system incorporating the Clinical Algorithm, knowledge on barriers to the implementation of CR can be expanded, and implementation strategies can be improved. Furthermore, these data can provide benchmark information for improving quality in individual CR centres.
Notwithstanding the fact that using a clinical algorithm in general is an effective strategy to improve guideline adherence, it may not always be successful. This is particularly the case when external barriers play an important role, such as organisational or procedural changes that are beyond the tasks and responsibilities of the healthcare professionals. Also, it should be acknowledged that the application of a clinical algorithm is only one among several strategies that can be used to improve adherence to CR guidelines. It may be even more effective when incorporating other strategies, such as educational outreach visits to healthcare professionals. Additional interventions may also be aimed at the patient, e.g. by providing all eligible patients (web-based) information at discharge to improve insight into disease severity, risk behaviour and follow-up plans.

Although the 2004 Dutch Clinical Algorithm for assessing patient needs in Cardiac Rehabilitation was shown to be effective for improving compliance with guideline-recommended therapeutic decisions, several shortcomings and deficiencies were revealed. Therefore, a thorough revision was performed according to the latest scientific insights, using more objective assessment instruments. The new clinical algorithm ( Beslisboom Poliklinische Indicatiestelling Hartrevalidatie 2010) [ 14] provides an efficient decision procedure to delegate tasks and responsibilities to healthcare professionals active in the field of CR. 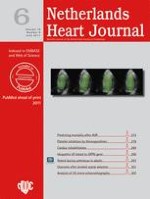 The brain-heart connection; a round trip

Is platelet inhibition due to thienopyridines increased in elderly patients, in patients with previous stroke and patients with low body weight as a possible explanation of an increased bleeding risk?