NSSI is a robust predictor of suicidal thoughts and behaviors. Despite this close link, there is a lack of information regarding specific behavioral and psychological features of NSSI that may influence, or serve as drivers, of these relationships. Consequently, the aim of the current study was to elucidate the specific NSSI-related mechanisms that may confer risk for suicide ideation and suicide attempts. Participants having a lifetime history of NSSI (N = 659) were included in the current study and completed a series of online questionnaires. Exploratory mediation analysis was utilized to simultaneously examine 28 behavioral and psychological NSSI features as potential mechanisms of the NSSI-suicide ideation and NSSI-suicide attempt relationships. Results identified 11 NSSI features as having non-zero specific indirect effects in the NSSI-suicide ideation relationship, with the antisuicide function of NSSI having the strongest influence. In examining the NSSI-suicide attempt relationship 12 NSSI features were identified as having non-zero specific indirect effects, with endorsement of swallowing dangerous substances as an NSSI method having the strongest influence. These findings suggest psychological and behavioral features of NSSI may differentially impact risk for suicide ideation and suicide attempts, respectively.
vorige artikel Correction to: A Bifactor and Item Response Theory Analysis of the Eating Disorder Inventory-3
volgende artikel Portuguese Validation of the Brief Peer Conflict Scale: Validity, Reliability and Invariance across Gender 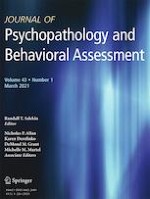 The Symptom Structure of Seasonal Affective Disorder: Integrating Results from Factor and Network Analyses in the Context of the Dual Vulnerability Model

The COVID-19 Psychological Wellbeing Study: Understanding the Longitudinal Psychosocial Impact of the COVID-19 Pandemic in the UK; a Methodological Overview Paper

Discrepancies Between Teacher- and Child- Reports of Proactive and Reactive Aggression: Does Prosocial Behavior Matter?