Toddlers may be at particularly high risk for a number of psychiatric, developmental and neurobiological consequences in the aftermath of trauma. The social and emotional impact of potentially traumatic life events experienced between 6 and 36-months of age was assessed in an epidemiological birth cohort of 18- to 36-month-olds from the Greater New Haven Area. Event-exposed toddlers evidenced greater symptom severity on the ITSEA Internalizing, Externalizing, Dysregulation, Atypical and Maladaptive scales, as well on the CBCL Internalizing and Externalizing scales than those not exposed. Approximately one-fifth of event-exposed toddlers were reported by their parents to have experienced a dramatic change in functioning following the event, and were described as experiencing higher levels of symptoms consistent with Post-Traumatic Stress Disorder (PTSD), namely re-experiencing and arousal, than exposed toddlers whose parents did not report a change in their functioning. Implications for clinicians and child care providers working with toddlers and their parents are discussed. 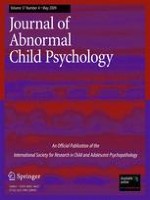 The Association Between Observed Parental Emotion Socialization and Adolescent Self-Medication

Stepping Stones Triple P: An RCT of a Parenting Program with Parents of a Child Diagnosed with an Autism Spectrum Disorder

Developmental Links Between Trajectories of Physical Violence, Vandalism, Theft, and Alcohol-Drug Use from Childhood to Adolescence

Mediational Pathways Through Which Positive and Negative Emotionality Contribute to Anhedonic Symptoms of Depression: A Prospective Study of Adolescents