The use of cardiac magnetic resonance (CMR) analysis has increased in patients with hypertrophic cardiomyopathy (HCM). Quantification of left ventricular (LV) measures will be affected by the inclusion or exclusion of the papillary muscles as part of the LV mass, but the magnitude of effect and potential consequences are unknown.

We performed Cine-CMR in (1) clinical HCM patients (n = 55) and (2) subclinical HCM mutation carriers without hypertrophy (n = 14). Absolute and relative differences in LV ejection fraction (EF) and mass were assessed between algorithms with and without inclusion of the papillary muscles.

In clinical HCM patients, CMR quantification of important LV measures is significantly affected by inclusion or exclusion of the papillary muscles. In relative terms, the difference was similar in subjects without hypertrophy. This underscores a general need for a uniform approach in CMR image analysis. 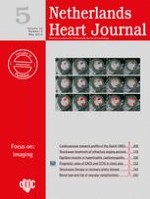 Electrocardiogram: the saviour for this patient

The stethoscope: celebration or cremation after 200 years?