Adolescents at-risk for problem behaviors can have more difficulties in developing a firm sense of personal identity. Hence the purpose of this prospective longitudinal study was to scrutinize how externalizing problems in early adolescence impact identity development in middle to late adolescence. Participants were 443 (43.12 % female) Dutch adolescents. Teachers rated their externalizing problem behaviors when participants were 11 or 12 years old and their identity formation was studied during five consecutive years (from 14 to 18 years of age). The sample was divided into four groups: boys and girls with a high versus a low-risk for externalizing problem behaviors. Participants completed a self-report measure of identity commitment, in-depth exploration, and reconsideration of commitment. Multi-group Latent Growth Curve and profile stability analyses were used to evaluate identity development across adolescence. Findings indicated that high-risk boys and girls reported a less structured identity, with lower levels of commitment and higher levels of reconsideration of commitment. Since externalizing problems behaviors and lack of a coherent sense of identity might reinforce each other, early intervention for high-risk adolescents might foster positive youth development. 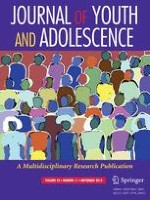 Attributes that Differentiate Children Who Sip Alcohol from Abstinent Peers

Online Network Influences on Emerging Adults’ Alcohol and Drug Use