This research provides an example of testing for differential item functioning (DIF) using multiple indicator multiple cause (MIMIC) structural equation models. True/False items on five scales of the Schedule for Nonadaptive and Adaptive Personality (SNAP) were tested for uniform DIF in a sample of Air Force recruits with groups defined by gender and ethnicity. Uniform DIF exists when an item is more easily endorsed for one group than the other, controlling for group mean differences on the variable under study. Results revealed significant DIF for many SNAP items and some effects were quite large. Differentially-functioning items can produce measurement bias and should be either deleted or modeled as if separate items were administered to different groups. Future research should aim to determine whether the DIF observed here holds for other samples.
vorige artikel Unidimensionality and Developmental Trajectory of Aggressive Behavior in Clinically-Referred Boys: A Rasch Analysis
volgende artikel An Exploratory Study of Integrative Personality Pathology Systems and the Interpersonal Circumplex 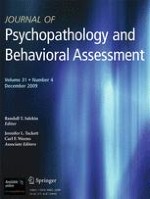 Psychopathy and Anxiety in Children and Adolescents: New Insights on Developmental Pathways to Offending

Positive and Negative Affect in Parents and Adolescents: Gender and Assessment Method Considerations