Identity Structure and Processes in Adolescence: Examining the Directionality of Between- and Within-Person Associations | mijn-bsl Skip to main content
ZOEKEN MENU 1 2 3 4 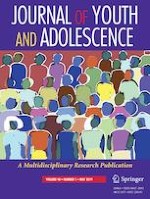 Plenty of Fish in the Ocean: How do Traits Reflecting Resiliency Moderate Adjustment After Experiencing a Romantic Breakup in Emerging Adulthood?