This study aimed to determine the relationship between latent classes of adverse childhood experience (ACEs) and internalizing disorders (anxiety and depression) among US children. The 2016 National Survey of Children’s Health data for children aged 6–17 was used. Latent class analysis was performed to identify distinct sub-types of ACE exposures and survey-weighted logistic regression models were employed to determine whether these classes were associated with any or comorbid childhood internalizing disorders, after controlling for meaningful covariates. Four latent classes were identified: income hardship, divorce, mental health or substance abuse exposure, and high ACEs overall. Children in three of the four classes were significantly more likely to have any childhood internalizing disorder when compared to children reporting no ACEs, while children in all classes were significantly more likely to have a comorbid history of anxiety and depression. Thus, children exposed to ACEs should receive necessary mental health screenings and treatments. 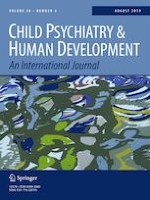 A Longitudinal Study on the Relations Among Fear-Enhancing Parenting, Cognitive Biases, and Anxiety Symptoms in Non-clinical Children