How useful are the SF-36 sub-scales in older people? Mokken scaling of data from the HALCyon programme | mijn-bsl Skip to main content
TOOLBAR 1 2 3 4
ZOEKEN MENU 1 2 3 4

The Medical Outcomes Study (MOS) Short-Form General Health Survey (SF-36) is a self-reported multidimensional measure of general health status or quality of life [ 1]. It produces eight scales of health status: physical functioning (PF), role limitation caused by physical health problems (RP), bodily pain (BP), general health perceptions (GH), vitality (VT) for energy levels and fatigue, social functioning (SF), role limitation because of emotional problems (RE) and mental health (MH). Lower scores on these scales reflect poorer health. The number of items in each sub-scale varies from two (SF and BP) to ten (PF), and therefore, sub-scales such as SF may exhibit more measurement errors than those with more items. Nevertheless, the SF-36 has been tested for use in the United Kingdom [ 2] and shown considerable evidence for construct validity and reliability of the scores.
The suitability of SF-36 for use in older people is the subject of ongoing discussion due to the relatively poor levels of item response, including the inability to compete SF-36 with increasing age and the relevance of the items to older people [ 2‐ 4]. Limited research has been done on variations of the psychometric properties of the scores in older people. For instance, if a scale is found to have hierarchical properties, then this indicates that items are ordered relative to one another along the latent trait being measured [ 5]. This property can also be interpreted as measuring the extent to which items in the scale are measuring the same trait or property (unidimensionality). Researchers have sometimes inappropriately used Cronbach’s alphas to represent unidimensionality [ 6, 7] when it is known that alpha can take a high value even when the set of items measures several unrelated latent constructs [ 8, 9]. A non-parametric item response model, known as Mokken scaling, can provide a useful alternative to determine whether hierarchical scales exist in the collection of items and hence obtain a measure of ‘unidimensionality’ [ 10]. A detailed description of hierarchical properties and the assumptions underlying of Mokken scaling is provided elsewhere [ 5, 11].
The other characteristic of interest is whether the measurements are precise or internally consistent (reliability). This measures the variation of the test results if the test is repeated under comparable circumstances. Data from the Dutch National Study have been used to examine these properties, but this was for a wide age range of adults using a Dutch version of the scale [ 11].
HALCyon–Healthy Ageing across the Life Course—is a collaborative research programme using data from up to nine UK narrow age range cohorts to examine how factors across the life course influence healthy ageing in older people. We used data from three of these cohorts to evaluate the unidimensionality and internal consistency (reliability) of the SF-36 sub-scales.

The Hertfordshire Ageing Study (HAS)

From 1911 to 1948, details of each birth in Hertfordshire, United Kingdom including birthweight, was recorded by the attending midwife and held in central registers. The National Health Service Central Register was used to trace singleton infants born to married mothers. Those still living in Hertfordshire who had been born between 1920 and 1930 were invited to take part in research into life course influences on ageing [ 12]. Of 1,428 people invited to participate in the initial study in 1994–1995, 824 (58%) agreed to a home interview and 717 attended a clinic for further assessments. In 2003–2005, a follow-up study was carried out when the participants were aged between 72 and 83 years. In total, 359 men and women (60% of those surviving) were interviewed, during which 349 completed the SF-36.

In 1998–2004, men and women born in Hertfordshire between 1931 and 1939 and still living in the county were recruited to a new, larger cohort study in order to evaluate interactions between the genome, the intrauterine and early postnatal environment, and adult diet and lifestyle in the aetiology of chronic disorders in later life [ 13]. Of 6,099 men and women approached, 3,225 (53%) agreed to be interviewed at home. As part of the interview, 3,215 people completed the SF-36.

The Mokken scaling model, a non-parametric model, was applied to each sub-scale of SF-36 in order to evaluate unidimensionality. The extent to which a set of items is scalable is given by the Loevinger’s coefficient (H), which is a measure of how well the set of items meet the hierarchical criteria of Mokken scales. H will be calculated for individual items in terms of the number of items that violate hierarchical assumptions relative to other items, and an overall H can be calculated for a set of items. The lower bound for reliability was determined by Cronbach’s alpha [ 11]. Mokken scaling was performed using the module MSP in STATA 10.

To our knowledge, this is the first report of these psychometric properties of SF-36 using data specifically obtained from older people. We found that with the exception of the GH and MH, which showed medium scalability, all other sub-scales demonstrate strong scalability. The results are consistent across all the three cohorts, providing evidence that items in each of the eight sub-scales have measured the same trait or property. There was no evidence of regional differences between Hertfordshire and Aberdeen in terms of unidimensionality.
Individual items ‘I seem to get sick a little easier than other people’, ‘I’m as healthy as anyone I know’ and ‘I expect my health to get worse’ of the general health sub-scale and the ‘have you been a very nervous person’, ‘have you been a happy person’ of the mental health sub-scale have low scalability in the oldest cohort. These items may be modified or removed from the sub-scales for the older population as they may have difficulty in responding to or endorsing these items.
In terms of reliability, the Cronbach’s alphas are high enough for research purposes (between 0.7 and 0.8) for all sub-scales, while for physical functioning (0.92) and role limitation caused by physical health problems (0.90, 0.92) they reach levels high enough for clinical application (decisions about individuals). These results broadly concur with those found from a study using a Dutch language version of SF-36 [ 11], with the exception that we have also found the reliability of the role physical sub-scale to be high enough for clinical application.

The consistency of our findings across three cohorts supports the usefulness of all the sub-scales for research purposes and suggests that the sub-scales physical functioning and role limitation caused by physical health problems could also be used for clinical purposes. Our results suggest that caution is needed when interpreting results for sub-scales with poor unidimensionality. There is some scope, therefore, for modification of items in the general health and mental health sub-scales of SF-36 for older populations (aged 73+).

The HALCyon collaborative research programme is funded by the New Dynamics of Ageing (NDA) programme, a joint seven-year initiative of five UK Research Councils. Follow-up of the Aberdeen Birth Cohort 1936 was supported by a Wellcome Trust career development award to Professor L Whalley. The Hertfordshire Cohort Study was funded by the Medical Research Council, the British Heart Foundation, Arthritis Research Campaign, the National Osteoporosis Society, Wellcome Trust and the University of Southampton. The Hertfordshire Ageing Study was funded by the Medical Research Council and the University of Southampton.
Open Access This is an open access article distributed under the terms of the Creative Commons Attribution Noncommercial License ( https://​creativecommons.​org/​licenses/​by-nc/​2.​0 ), which permits any noncommercial use, distribution, and reproduction in any medium, provided the original author(s) and source are credited. 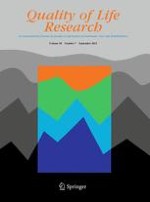 Quality of life in Brazil: normative values for the Whoqol-bref in a southern general population sample

Relationship between spirituality/religiousness and coping in patients with residual schizophrenia