To explore whether punitive parenting styles contribute to early-acquired emotion knowledge deficits observable in neglected children, we observed 42 preschool children’s emotion knowledge, expression recognition time, and IQ. The children’s mothers completed the Parent–Child Conflict Tactics Scales to assess the recent use of three types of discipline strategies (nonviolent, physically punitive, and psychological aggression), as well as neglectful parenting. Fifteen of the children were identified as neglected by Child Protective Services (CPS) reports; 27 children had no record of CPS involvement and served as the comparison group. There were no differences between the neglect and comparison groups in the demographic factors of gender, age, home language, minority status, or public assistance, nor on IQ. Hierarchical multiple regression modeling showed that neglect significantly predicted emotion knowledge. The addition of IQ contributed a significant amount of additional variance to the model and maintained the fit. Adding parental punitiveness in the final stage contributed little additional variance and did not significantly improve the fit. Thus, deficits in children’s emotion knowledge may be due primarily to lower IQ or neglect. IQ was unrelated to speed of emotion recognition. Punitiveness did not directly contribute to emotion knowledge deficits but appeared in exploratory analysis to be related to speed of emotion recognition. 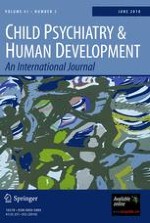 The Reliability and Criterion Validity of the Diagnostic Infant and Preschool Assessment: A New Diagnostic Instrument for Young Children

Psychosocial Correlates of Insomnia in An Adolescent Population

Temperament, Personality and Developmental Psychopathology: A Review Based on the Conceptual Dimensions Underlying Childhood Traits

Factor Structure, Reliability and Validity of the Taiwanese Version of the Multidimensional Anxiety Scale for Children