The EuroQol Valuation Technology (EQ-VT) uses traditional time trade-off (tTTO) for health states better than dead and lead-time TTO (LT-TTO) for states worse than dead to elicit a value (−1.0 to +1.0) for each health state. In the Canadian EQ-5D-5L Valuation study which used the EQVT platform, we observed an unexpected peak in frequency of “0” values and few negative values, particularly in the range of 0 to −0.5. To better understand this finding, we sought to explore respondents’ thought processes while valuing a health state, and their understanding of the tTTO and LT-TTO exercises.

Mean age of participants (N = 70) was 40 ± 18.1 years, 60 % female, and 76 % Caucasian. Participants provided similar reasons for valuing a health state same as or worse than dead. Many participants expressed confusion about worse than dead valuations, distinction between same as and worse than dead, and the transition from tTTO to LT-TTO. A few indicated that the addition of 10 years of full health in the LT-TTO influenced their valuations.

The transition from tTTO to LT-TTO in the EQVT was confusing to participants, whereby some health state valuations around this transition appeared to be arbitrary.
vorige artikel Item-level informant discrepancies across obese–overweight children and their parents on the PedsQL™ 4.0 instrument: an iterative hybrid ordinal logistic regression
volgende artikel How does the EQ-5D perform when measuring quality of life in dementia against two other dementia-specific outcome measures? 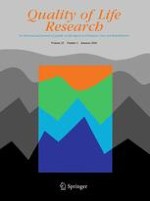 Relevance of community structures and neighbourhood characteristics for participation of older adults: a qualitative study

Relationships among symptom severity, coping styles, and quality of life in community-dwelling women with urinary incontinence: a multiple mediator model