The use of preference-based generic instruments to measure the health-related quality of life of a general population or of individuals suffering from a specific disease has been increasing. However, there are several discrepancies between instruments in terms of utility results. This study compares SF-6D and EQ-5D when administered to patients with cataracts and aims at explaining the differences. Agreement between EQ-5D and SF-6D health state classifications was assessed by correlation coefficients. Simple correspondence analysis was used to assess the agreement among the instrument’s descriptive systems and to investigate similarities between dimensions’ levels. Cluster analysis was used to classify SF-6D and EQ-5D levels into homogeneous groups. There was evidence of floor effects in SF-6D and ceiling effects in EQ-5D. Comparisons of means showed that SF-6D values exceeded EQ-5D values. Agreement between both instruments was high, especially between similar dimensions. However, different valuation methods and scoring algorithms contributed to the main differences found. We suggest that one or both instruments should be revised, in terms of their descriptive systems or their scoring algorithms, in order to overcome the weakness found. 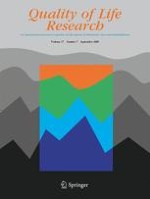 In reply to Mauer et al. “Statistical methodology is crucial in prognostic factor-analysis of health-related quality of life”