Antithrombotic treatment choices are complicated when patients have both atrial fibrillation (AF) and acute coronary syndrome and/or undergo percutaneous coronary intervention (PCI). In this study, we aimed to gain insight into antithrombotic management strategies in daily clinical practice.

We invited interventional cardiologists to complete the WOEST (What is the Optimal antiplatElet & Anticoagulant Therapy in Patients With Oral Anticoagulation and Coronary StenTing) survey 2018. In this questionnaire, we presented a patient with a non-ST-elevation myocardial infarction (NSTEMI) and an elective PCI case.

The results were based on 118 completed questionnaires (response rate 69.4%). In the case of the AF patient with NSTEMI, most cardiologists indicated they would initiate dual antiplatelet therapy (acetylsalicylic acid and clopidogrel) and continue non-vitamin K antagonist oral anticoagulant (NOAC) therapy at admission and during coronary angiography/PCI. At discharge, 70.3% would prescribe triple antithrombotic therapy (oral anticoagulation, acetylsalicylic acid and clopidogrel), mostly for 1 month. One year after NSTEMI, 83.1% would cancel the antiplatelet therapy and prescribe NOAC monotherapy. For the AF patient undergoing elective PCI, 51.7% would start dual antiplatelet therapy prior to the procedure and 52.5% would discontinue NOAC therapy prior to the PCI. At discharge, 55.1% would start triple antithrombotic therapy. Furthermore, 25.4% responded they routinely prescribe a reduced dose of NOAC after discharge. One year after PCI, 89.0% would continue NOAC monotherapy.

The WOEST survey demonstrated heterogeneity in antithrombotic management strategies among interventional cardiologists. This observed variety mirrors the heterogeneity of the many guidelines and consensus documents. Further research is needed to guide patient-tailored medicine for AF patients undergoing PCI.
Extras
Table 1 Overview of questions in the WOEST survey 2018
Opmerkingen

For patients with atrial fibrillation (AF) and an increased CHA2DS2-VASc score (≥2 for men and ≥3 for women), guidelines recommend lifelong treatment with oral anticoagulation (OAC) to reduce stroke risk [1]. For patients with acute coronary syndrome (ACS) or undergoing percutaneous coronary intervention (PCI) with stenting, guidelines recommend treatment with dual antiplatelet therapy (DAPT), consisting of acetylsalicylic acid and a P2Y12 inhibitor to reduce the risk of stent thrombosis and other atherothrombotic events [2, 3]. However, treatment choices are complicated when patients have both AF and ACS and/or undergo PCI. Current clinical guidelines acknowledge considerable gaps in the availability of high-quality evidence regarding optimal antithrombotic therapy for these patients.
Recently, the results of four randomised controlled trials have been published, in which the effect of vitamin K antagonists (VKAs) versus non-vitamin K antagonist oral anticoagulants (NOACs) in combination with antiplatelet therapy was investigated in patients undergoing PCI with stenting [4‐7]. Furthermore, European and American expert consensus documents have been updated [8, 9]. According to the European guidelines, most patients should be treated with both OAC and DAPT (i.e. triple antithrombotic therapy). However, the inevitable trade-off of intensification of antithrombotic therapy are more bleeding complications, which is associated with increased mortality [10‐12]. Therefore, antithrombotic treatment for this complex population should be carefully balanced.
We have noticed important differences in antithrombotic strategies carried out by cardiologists. To obtain insight into the current antithrombotic strategies in daily clinical practice for patients with both AF and ACS and/or undergoing PCI with stenting, we carried out a survey in Dutch and some international PCI centres.

The WOEST (What is the Optimal antiplatElet & Anticoagulant Therapy in Patients With Oral Anticoagulation and Coronary StenTing) survey 2018 is a questionnaire addressing the antithrombotic treatment of patients with AF undergoing PCI with stenting in daily practice from the perspective of the treating interventional cardiologist. This survey was based on a 19-item online questionnaire sent out to all interventional cardiologists working in the 27 PCI centres in the Netherlands and to individual interventional cardiologists in 24 PCI centres in Belgium, Germany, the United Kingdom, Denmark, Austria, Switzerland, France, Spain, Italy, Greece, Portugal and Sweden. The survey was conducted from September to December 2018.
As an introduction to the questions posed, we presented two cases: (1) AF patient using a NOAC who is hospitalised for a non-ST-elevation myocardial infarction (NSTEMI) and needs urgent PCI, and (2) AF patient using a NOAC who is diagnosed with chronic coronary syndrome and needs to undergo elective PCI. Both patients carry an intermediate bleeding and thrombotic risk. A complete overview of the survey questions is shown in Tab. 1 (see Electronic Supplementary Material). The survey was reviewed by an expert panel.
The Medical research Ethics Committees United confirmed that the Medical Research Involving Human Subjects Act (Wet medisch-wetenschappelijk onderzoek met mensen) did not apply to this noninterventional study; hence, official ethical approval by the ethics committee was not required. Declaration approval was obtained from the Institutional Review Board. A local study protocol is available. The study was conducted in accordance with the Declaration of Helsinki.

A total of 118 interventional cardiologists completed the questionnaire (response rate 69.4%). Of them, 100 cardiologists (84.7%) worked in a total of 27 different PCI centres in the Netherlands.

Of the responding cardiologists, 73.7% reported that a standard local protocol is available for the antithrombotic management of patients on OAC who require PCI.
For the AF patient with NSTEMI, 95.8% of the cardiologists would start antiplatelet therapy as soon as possible after admission. The majority of these cardiologists (70.3%) responded they initiate DAPT (acetylsalicylic acid and clopidogrel), 22.9% initiate P2Y12 inhibitor monotherapy (ticagrelor 90 mg twice daily, clopidogrel 75 mg once daily or prasugrel 10 mg once daily), and 6.8% initiate acetylsalicylic acid monotherapy. More than half (56.8%) would continue NOAC therapy at admission and during coronary angiography/PCI. During PCI, 33.9% would administer a reduced dose of heparin and 3.4% chose not to administer heparin at all.
At discharge, most of the cardiologists (70.3%) would treat a patient with an intermediate bleeding risk as well as an intermediate thrombotic risk with triple antithrombotic therapy. In case of a high bleeding risk, 9.3% would start triple therapy; in case of both a high bleeding and a high thrombotic risk, 43.2% would initiate this treatment. When prescribing triple antithrombotic therapy, the majority (83.1%) would do this for 1 month. A reduced dose of a NOAC (rivaroxaban 15 mg once daily, apixaban 2.5 mg twice daily, dabigatran 110 mg twice daily in patients <80 years, edoxaban 30 mg once daily) would be prescribed by 34.7% of the cardiologists; the others would prescribe the routinely dosed NOAC. After 1 year, the majority (83.1%) would cancel the antiplatelet therapy and prescribe NOAC monotherapy.
For the AF patient undergoing elective PCI, 51.7% would start DAPT prior to elective PCI. The others would start single antiplatelet therapy, mainly a P2Y12 inhibitor. More than half (52.5%) indicated to discontinue NOAC therapy prior to PCI and no one chose to bridge the anticoagulation therapy. If NOAC therapy is continued during PCI, 4.2% would not administer heparin during the procedure, which means that 95.8% would give heparin, one-third of whom would use a reduced dose.
At discharge, the default strategy was triple antithrombotic therapy for more than half of the cardiologists (55.1%); the others would start dual antithrombotic therapy consisting of a P2Y12 inhibitor and an oral anticoagulant. In case of a high bleeding risk, 5.1% would start triple antithrombotic therapy; in case of both a high bleeding and a high thrombotic risk, 31.4% would start this treatment. When triple antithrombotic therapy is prescribed, 89.8% would prescribe acetylsalicylic acid for 1 month. Furthermore, 25.4% indicated to prescribe a reduced dose of NOAC after discharge. One year after PCI, 89.0% would stop the antiplatelet therapy and continue NOAC monotherapy.
In the elective PCI setting, 38.1% of the cardiologists would switch to a NOAC if the patient is using a VKA. If the patient has ACS, is using a VKA and is in urgent need of PCI, 37.3% would switch to a NOAC. All results are shown in Tab. 1.
Table 1
Management of AF patients on NOAC therapy undergoing PCI, according to the WOEST survey 2018 among 118 cardiologists
AF atrial fibrillation, NOAC non-vitamin K antagonist oral anticoagulant, PCI percutaneous coronary intervention, VKA vitamin K antagonist, NSTEMI non-ST-elevation myocardial infarction, ASA acetylsalicylic acid, UFH/LMWH unfractionated heparin/low-molecular weight heparin, N/A not applicable

Our study has some limitations. Despite the high response rate (69.4%), nonresponders might reflect those with less interest in and knowledge of the topic (response bias). Furthermore, we did not invite all European interventional cardiologists, but only a selection. Therefore, this survey is representative of current clinical practice in the Netherlands, but not across Europe. Finally, as in most surveys, the study relied on self-report and we did not validate self-report against objective measures.

In this online, international survey among interventional cardiologists, we observed heterogeneity in antithrombotic management strategies for AF patients treated with OAC undergoing PCI. This observed variety mirrors the heterogeneity of the many guidelines and consensus documents. Further research is needed to guide patient-tailored medicine for AF patients undergoing PCI.

A.J.W.M. de Veer received speaker’s and/or consulting fees from Bayer and Boehringer Ingelheim. N. Bennaghmouch has nothing to declare. W.J.M. Dewilde received speaker’s fees from Bayer and Daiichi Sankyo. J.M. ten Berg reports advisory/consulting/speaker’s fees from Accumetrics, AstraZeneca, Bayer, Boehringer Ingelheim, Bristol-Myers Squibb, Daiichi Sankyo, Eli Lilly, The Medicines Company, Pfizer, Ferrer, and institutional research grants from AstraZeneca and ZonMw.
Open Access This article is licensed under a Creative Commons Attribution 4.0 International License, which permits use, sharing, adaptation, distribution and reproduction in any medium or format, as long as you give appropriate credit to the original author(s) and the source, provide a link to the Creative Commons licence, and indicate if changes were made. The images or other third party material in this article are included in the article’s Creative Commons licence, unless indicated otherwise in a credit line to the material. If material is not included in the article’s Creative Commons licence and your intended use is not permitted by statutory regulation or exceeds the permitted use, you will need to obtain permission directly from the copyright holder. To view a copy of this licence, visit http://​creativecommons.​org/​licenses/​by/​4.​0/​.
vorige artikel The Netherlands Sports Cardiology Map: a step towards sports cardiology network medicine for patient and athlete care
volgende artikel Diagnostic value of the electrocardiogram in the assessment of prior myocardial infarction
insite
INHOUD
share
DELEN 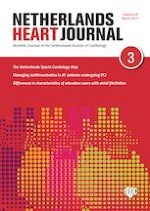 Characteristics of patients with atrial fibrillation prescribed edoxaban in Belgium and the Netherlands: insights from the ETNA-AF-Europe study