Holding an action plan in memory for later execution can delay execution of another action if the actions share a similar (compatible) feature. This compatibility interference (CI) occurs for actions that share the same response modality (e.g., manual response). We investigated whether CI can generalize to actions that utilize different response modalities (manual and vocal). In three experiments, participants planned and withheld a sequence of key-presses with the left- or right-hand based on the visual identity of the first stimulus, and then immediately executed a speeded, vocal response (‘left’ or ‘right’) to a second visual stimulus. The vocal response was based on discriminating stimulus color (Experiment 1), reading a written word (Experiment 2), or reporting the antonym of a written word (Experiment 3). Results showed that CI occurred when the manual response hand (e.g., left) was compatible with the identity of the vocal response (e.g., ‘left’) in Experiment 1 and 3, but not in Experiment 2. This suggests that partial overlap of semantic codes is sufficient to obtain CI unless the intervening action can be accessed automatically (Experiment 2). These findings are consistent with the code occupation hypothesis and the general framework of the theory of event coding (Behav Brain Sci 24:849–878, 2001a; Behav Brain Sci 24:910–937, 2001b). 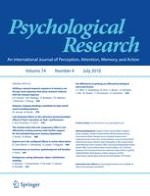 The reaction-time task-rule congruency effect is not affected by working memory load: further support for the activated long-term memory hypothesis

Sex differences in parking are affected by biological and social factors