The rate of HIV infection among young men who have sex with men (YMSM) is increasing in the United States, and targeted research is needed to inform interventions aimed at reducing HIV transmission in this population. This study aims to understand the association between HIV status disclosure and sexual risk behavior among HIV-positive YMSM. A particular focus is given to depressive symptoms and their potential role in explaining the association between HIV disclosure and sexual risk behavior. In a sample of 991 YMSM receiving care at 20 clinics across the United States, Univariate and multivariate analyses were conducted to explore these associations. Approximately one-half (52.4 %) of participants reported disclosing to their current sexual/romantic partner. Disclosure to family members was negatively associated with sexual risk behavior. Also, depressive symptoms were positively associated with sexual risk behavior. We discuss the implications of our findings for future research and intervention.
vorige artikel Marital quality, depressive symptoms, and the metabolic syndrome: a couples structural model
volgende artikel Attachment insecurity predicts responses to an interdisciplinary chronic pain rehabilitation program 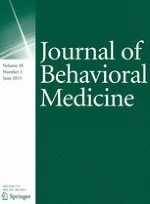