Rates of co-morbid psychiatric conditions in children with Pervasive Developmental Disorder-Not Otherwise Specified (PDD-NOS) are hardly available, although these conditions are often considered as more responsive to treatment than the core symptoms of PDD-NOS. Ninety-four children with PDD-NOS, aged 6–12 years were included. The DISC-IV-P was administered. At least one co-morbid psychiatric disorder was present in 80.9% of the children; 61.7% had a co-morbid disruptive behavior disorder, and 55.3% fulfilled criteria of an anxiety disorder. Compared to those without co-morbid psychiatric disorders, children with a co-morbid disorder had more deficits in social communication. Co-morbid disorders occur very frequently in children with PDD-NOS, and therefore clinical assessment in those children should include assessment of co-morbid DSM-IV disorders.
vorige artikel Memory Illusion in High-Functioning Autism and Asperger’s Disorder
volgende artikel Abnormalities on the Neurological Examination and EEG in Young Children with Pervasive Developmental Disorders 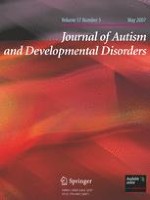