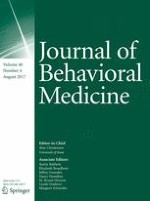 How people think about the chemicals in cigarette smoke: a systematic review

Discrimination and the HPA axis: current evidence and future directions

Effects of sleep management with self-help treatment for the Japanese elderly with chronic insomnia: a quasi-experimental study

The relationship between pain, disability, guilt and acceptance in low back pain: a mediation analysis