The longitudinal relationships between depression, anxiety, conduct problems, and inattention were investigated. The present study attempted to overcome the methodological limitations of prior research on childhood co-occurring syndromes by using continuous measures of constructs, controlling for multiple symptoms at baseline, and considering the role of age and gender. Using a community sample of 6–11 year-old children, we found evidence of homotypic and heterotypic continuity in baseline characteristics and their symptoms 5 years later. Notably, inattention and conduct problems were stable over time regardless of age or gender. Additionally, inattention predicted subsequent depression, a relationship unaffected by overlapping psychopathology. With attention problems considered, conduct problems did not predict future depression as others have predicted. Instead, depression in young children was a unique risk factor for subsequent conduct problems. Similarly, most other relationships were moderated by age or gender. The implications for understanding childhood psychopathology and for designing prevention and treatment programs are discussed. 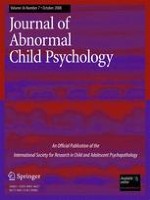 ADHD and Behavioral Inhibition: A Re-examination of the Stop-signal Task

Do Theory of Mind and Executive Function Deficits Underlie the Adverse Outcomes Associated with Profound Early Deprivation?: Findings from the English and Romanian Adoptees Study