Previous studies suggested that helicopter parenting was associated with college students’ psychological maladjustment. The mechanisms and circumstances explaining such an association, however, were less studied. In the present study, we aimed to extend the current research to investigate how and under what condition helicopter parenting was related to college students’ psychological maladjustment by examining a potential mediator—self-control, and a contextual moderator—living arrangement.

This study used a sample of 432 emerging adult college students from two large southern universities in the U.S. Participants reported their parents’ helicopter parenting, their own self-control, symptoms of depression and anxiety, life satisfaction, and demographics (e.g., living arrangement). 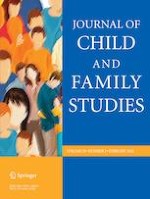 Association of Foster Care and its Duration with Clinical Symptoms and Impairment: Foster Care versus Non-Foster Care Comparisons with Spanish Children

Interpersonal Forgiveness and Adolescent Depression. The Mediational Role of Self-reassurance and Self-criticism

Muscle Dysmorphia in Adolescence: The Role of Parental Psychological Control on a Potential Behavioral Addiction