High prevalence mental disorders including depression, anxiety and substance use disorders are associated with high economic and disease burden. However, there is little information regarding the health state utility values of such disorders according to their clinical severity using comparable instruments across all disorders. This study reports utility values for high prevalence mental disorders using data from the 2007 Australian National Survey of Mental Health and Wellbeing (NSMHWB).

Utility values were derived from the AQoL-4D and analysed by disorder classification (affective only (AD), anxiety-related only (ANX), substance use only (SUB) plus four comorbidity groups), severity level (mild, moderate, severe), symptom recency (reported in the past 30 days), and comorbidity (combination of disorders). The adjusted Wald test was applied to detect statistically significant differences of weighted means and the magnitude of difference between groups was presented as a modified Cohen’s d.

Health state utility values of people with high prevalence mental disorders differ significantly by severity level, number of mental health comorbidities and the recency of symptoms, which provide new insights on the burden associated with high prevalence mental disorders in Australia. The derived utility values can be used to populate future economic models.
vorige artikel Do country-specific preference weights matter in the choice of mapping algorithms? The case of mapping the Diabetes-39 onto eight country-specific EQ-5D-5L value sets
volgende artikel People in states worse than dead according to the EQ-5D UK value set: would they rather be dead? 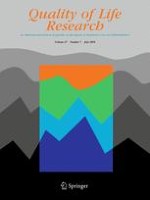 Quality of life of patients with gastrointestinal cancers undergoing chemotherapy