Melanoma is a disease associated with clinically significant levels of distress at the time of diagnosis and treatment initiation, decreasing over time [ 1‐ 3]. However very little is known about the impact of advanced melanoma (AM) on quality of life (QoL) outside the clinical trial setting. Patient-reported outcomes (PROs) specifically those that focus on health-related QoL, are used in melanoma clinical trials to supplement clinical outcomes [ 4, 5]. Assessing PROs in oncology is important as adverse events (AEs) and cancer symptoms affect subjective experience and functioning [ 6]. In melanoma trials, PROs are generally collected during therapy and for an abbreviated period after patients conclude treatment with investigational agents [ 4, 5]. This provides limited insight into real-world therapy effectiveness in patients more heterogeneous than are included in clinical trials.
Most evidence to support the use of immunotherapies derives from trials. Pembrolizumab (PEMBRO) and ipilimumab + nivolumab (IPI + NIVO) are approved immunotherapies for AM [ 7, 8]. In KEYNOTE-006, PEMBRO demonstrated prolonged progression-free survival (PFS) and overall survival (OS) compared to ipilimumab (IPI) [ 9]. This study also showed patients treated with PEMBRO experienced less QoL deterioration at week 12 compared to IPI. Subjects receiving IPI experienced more grade 3–5 AE, (59% IPI vs 17% PEMBRO), which may impact QoL [ 5, 9]. In CheckMate-067, which examined patients with AM treated with nivolumab (NIVO) or IPI + NIVO, and in CHECKMATE-069, which included patients treated with either IPI or IPI + NIVO, no treatments were associated with clinically meaningful change in QoL when measured by The European Organisation for Research and Treatment of Cancer (EORTC) Quality of Life Questionnaire C30 (QLQ-C30) or the EQ-5D [ 4, 10]. There are no studies reporting QoL in real-world settings in patients who receive PEMBRO or IPI + NIVO. Thus, the aim of this study was to examine QoL outcomes associated with PEMBRO treatment compared to IPI + NIVO when administered as first-line therapy in AM patients.

We report 24-week data from a cohort study of consecutively enrolled AM patients initiating PEMBRO or IPI + NIVO as first line in 9 US-based academic and satellite centers. Sites were identified in national provider databases and recruited by telephone. To be eligible, academic centers needed to treat ≥ 15 AM patients yearly and satellite centers needed to treat ≥ 7. Sites must have indicated use of both PEMBRO and IPI + NIVO in an attempt to balance enrollment between treatments within sites. Sites were blinded to sponsor and vice versa to avoid impact on treatment selection. Patients with histologically-confirmed unresectable Stage III or metastatic / Stage IV melanoma (excluding uveal or ocular melanoma), age ≥ 18, initiating first-line PEMBRO or IPI + NIVO between June 2017 and March 2018 were consented and enrolled. Patients were mailed paper PRO questionnaires within 10 days of starting therapy and weeks 6, 12, 18, 24 following therapy initiation. Patients were given a 10-day window before and after PRO assessment timepoints to complete questionnaires and were sent reminders by mail if not received. PRO collection continued after treatment discontinuation through death, most recent site visit date or loss to follow-up. This study was approved by the New England Institutional Review Board (Approval #120161001).

QoL analyses were exploratory in the study protocol and followed a pre-specified analysis plan. The analytic cohort included all enrolled patients completing at least one PRO instrument. An instrument was considered complete according to the missing item guidance in the EORTC QLQ-C30 and EQ-5D-5L manuals [ 11, 12].
PRO compliance was defined as the proportion of patients completing the instrument among those expected to complete at each time point, excluding deaths from the denominator. PRO completion was defined as the proportion of patients completing the instrument among all enrolled subjects, including deaths in the denominator.
Differences in patient characteristics were assessed using t tests for continuous data, and χ 2 tests for categorical data. The EORTC QLQ-C30 GHS/QoL score was calculated and standardized (range 0–100) [ 12]. Analyses were performed through week 24 using repeated measures mixed models. Least squares (LS) mean changes from baseline at each time period were calculated adjusting for age, ECOG performance states, baseline PRO score, AJCC stage, therapy objective response and presence of comorbidity. Analysis assessed the LS mean score change from baseline within treatments and between treatments at each timepoint using F tests. In addition to a week by treatment interaction term in the model to assess change at each time period, treatment by therapy objective response interaction was used in the same model to examine the impact of response within each treatment over time. We examined the proportion of patients who improved, remained stable or deteriorated at each week compared to the previous measurement period via a X 2 statistic, with clinically meaningful differences defined by a 10-point change from baseline for EORTC QLQ-C30 scales [ 13] and a 7-point change for the EQ-VAS [ 14]. We controlled for factors specified in the a priori analysis plan and potential confounders unbalanced between groups as identified in univariate analysis. Included in initial models were the covariates ECOG performance status, BRAF mutation vs wild type, PD-L1 expression positive vs negative, (each specified a priori) LDH status (normal, elevated 1–2 times upper limit of normal [ULN] or > 2 times ULN), and comorbidity. To avoid overfitting, parameters were entered into the model then removed. Covariates retained in regression models were those p < 0.1 (baseline QLQ-C30 GHS, comorbidity index, ECOG at baseline, age, AJCC stage, autoimmune comorbidity). As Qol, and not specific symptom scores in the EORTC QLQ-C30 were primary outcome of this analysis, symptom score changes from baseline were analyzed only descriptively.

Completion rates for both instruments at each timepoint within treatment groups were identical. At week 24 the completion rates were 95% and 96%, respectively for PEMBRO and IPI + NIVO. By week 6, three patients in the PEMBRO arm were lost to follow-up. At week 24, compliance rates were 99% and 100% for PEMBRO and IPI + NIVO, respectively. Missing data was were rare (< 2% total instruments) and no individual items were missed within instruments. (Supplemental Table 1).

All procedures performed in studies involving human participants were in accordance with the ethical standards of the institutional and/or national research committee and with the 1964 Helsinki declaration and its later amendments or comparable ethical standards. This article does not contain any studies with animals performed by any of the authors.

Informed consent was obtained from all individual participants included in the study.
Open AccessThis article is licensed under a Creative Commons Attribution 4.0 International License, which permits use, sharing, adaptation, distribution and reproduction in any medium or format, as long as you give appropriate credit to the original author(s) and the source, provide a link to the Creative Commons licence, and indicate if changes were made. The images or other third party material in this article are included in the article's Creative Commons licence, unless indicated otherwise in a credit line to the material. If material is not included in the article's Creative Commons licence and your intended use is not permitted by statutory regulation or exceeds the permitted use, you will need to obtain permission directly from the copyright holder. To view a copy of this licence, visit http://​creativecommons.​org/​licenses/​by/​4.​0/​.

Below is the link to the electronic supplementary material.
Supplementary file1 (DOCX 15 kb) 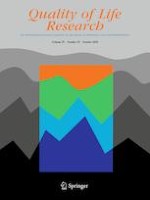 The association of stroke severity with health-related quality of life in survivors of acute cerebrovascular disease and their informal caregivers during the first year post stroke: a survey study