Myalgic encephalomyelitis/chronic fatigue syndrome (ME/CFS) is a serious and debilitating disorder associated with significant disruptions in daily life including. This study aimed to examine the impact of sociodemographic and patient symptom characteristics on health-related quality of life (HRQoL) of Australians with ME/CFS.

Self-reported data collected from 480 individuals diagnosed with ME/CFS were obtained between August 2014 and August 2018. This cross-sectional survey analysed sociodemographic, symptom characteristics and HRQoL according to the 36-Item Health Survey (SF-36). Multivariate linear regression models were used to determine ME/CFS symptoms associated with eight domains of HRQoL.

This study provides evidence that ME/CFS has a profound and negative impact on HRQoL in an Australian cohort.
Opmerkingen

Myalgic encephalomyelitis (ME), also referred to as chronic fatigue syndrome (CFS), is a serious condition clinically defined by dysregulation of the central nervous, cardiovascular and immune systems, endocrine dysfunction, and impaired cellular energy metabolism and ion transport [1, 2]. Due to the ambiguous nature of ME/CFS, there is no single diagnostic test; however, diagnosis relies on the fulfilment of criteria after unsuccessful differential diagnosis. In 1994, the Centers for Disease Control and Prevention (CDC) published the Fukuda Criteria to evaluate and classify ME/CFS patients and provide a basis for diagnosis [3]. A case of ME/CFS is defined under these criteria by the presence of unexplainable chronic fatigue that is not alleviated by rest. Furthermore, at least four additional concurrent symptoms including sore throat, tender lymph nodes, muscle and/or joint pain, impaired cognition and sleep disturbances are necessary for diagnosis. Revised protocols birthed the Canadian Consensus Criteria (CCC) (2003) and the International Consensus Criteria (ICC) (2011) [1, 4]. These revised definitions introduced the following symptoms post-exertional neuroimmune exhaustion accompanied by numerous neurological, cardiovascular, autonomic and neuroendocrine manifestations.
The prevalence of ME/CFS is difficult to determine due to the absence of a diagnostic test; however, estimates believe that 200,000 Australians have been diagnosed or report symptoms of ME/CFS [5]. Epidemiological studies have commented on the severity spectrum of ME/CFS. Patient severity is defined by a significant reduction in the patient’s premorbid activity level. Mild patients self-report an approximately 50% reduction in pre-illness activity level including ability to maintain employment and social interactions. Approximately 25% of ME/CFS patients are considered severe, being primarily bed-bound, while moderate patients are bound to their home [6]. Relatively few patients with ME/CFS completely recover [7], with a recovery rate below six% and increased disability in 10–20% of patients over time [8].
The Medical Outcomes Study Short-Form General Health Survey (SF-36) is widely used to measure self-reported health-related quality of life (HRQoL) [9, 10]. Previous qualitative investigations have used SF-36 to report distinctive patterns of impairment in ME/CFS patients and to distinguish these patients from other conditions. The SF-36 consists of domains separately referred to as physical functioning, physical role, body pain, general health, social functional, emotional health and fatigue/energy. A previous investigation by Reeves et al. defined SF-36 scores in mild, intermediate and severe ME/CFS patients [11]. According to this empiric ME/CFS case definition, the disability criterion is met by scoring the 25th percentile on any one of the following four SF-36 scales: Physical Functioning (≤ 70), Physical Role (≤ 50), Social Functioning (≤ 75) or Emotional Role (≤ 66.7) [11].
HRQoL is an important assessment in chronic conditions to monitor disability as a predictor of health service requirements [12]. The aim of this study was to further understand contributions of ME/CFS pathophysiology associated with reduced HRQoL and identify aspects of health that are most limited. We hypothesise that particular sociodemographic and symptom characteristics would be associated with significantly reduced HRQoL. Identifying these symptoms may improve patient management and health resource allocation.

This study utilises a cross-sectional survey during a four-year period from August 2014 to August 2018 that collected patient level data for biological investigations into ME/CFS at NCNED (National Centre for Neuroimmunology and Emerging Diseases) research centre. ME/CFS patients across Australia volunteered in this survey in response to online recruitment advertisements. To be eligible for this study, participants were required to: (1) report experiencing ME/CFS illness; (2) be between 18 and 65 years of age; and (3) be a resident of Australia. Informed consent was obtained by agreeing to terms and conditions disclosed online or signing a hard copy sent via email. This study was approved by Griffith University Human Research Ethics Committee (HREC reference: MSC0413).

Participants completed a survey through an online application (LimeSurvey, Carsten, Schmitz, Hamburg, Germany) or by hard copy in the mail. Data from completed hard copy questionnaires were returned to NCNED and manually entered into LimeSurvey by a member of the research team. Items in the survey were developed by the authors and items included sociodemographic details, a 60-item checklist on fatigue and ME/CFS symptoms repurposed from the Fukuda [3], CCC [4] and ICC [1] diagnostic definitions. Participants were asked to disclose other illnesses as diagnosed by a physician and medications routinely administered within two weeks of completing the questionnaire. All participants were anonymised using an alpha-numeric code.

Sociodemographic data were collected. Age was measured at time of response and gender (male or female). Body Mass Index (BMI, kg/m2) was calculated by participants according to self-reported weight (kg) and height (cm). BMI was used to categorised participants as underweight (< 18.5), normal (18.5–24.9), overweight (25.0–29.9) and obese (> 30.0). Participants reported their highest level of education obtained and assessed according to primary school, high school, professional training, undergraduate degree or postgraduate degree. Participants reported their working status and was analysed as full time, part time, disability pension, retired or unemployed. Smoking status was reported as either smoker or non-smoker.
Psychological comorbidity was assessed according to whether a participant reported concurrent diagnosis of a psychological condition by a physician (e.g. depression and anxiety ). Participants reported the number of visits to a general practitioner per. Participants were also asked whether they identified with an infectious event such as cold, flu, bacteria or viral infection prior to the onset of their illness and examined according to ‘yes’ or ‘no’ responses. Age of onset, defined as age the participant noticed ME/CFS symptoms had caused a disruption to daily or vocational activities.

To coincide with the study measures of HRQoL, this investigation asked participants to also report the impact of seven symptom categories during the past four weeks. These categories included the following: (i) cognitive difficulties (slowed thought, impaired concentration and short term memory loss); (ii) pain (headaches, muscle pain and multi-joint pain); (iii) sleep disturbances (insomnia, prolonged sleep, reversed sleep cycle); (iv) cardiovascular symptoms (orthostatic intolerance, heart palpitations, light headedness and dizziness); (v) respiratory symptoms (air hunger, laboured breathing); (vi) body temperature intolerances (subnormal body temperature, abnormal sweating episodes, hot flushes and cold extremities); and (vii) sensory, perceptual and motor disturbances (sensitivity to touch, light, odour, taste, sound, movement, and poor balance or coordination). Symptom severity was measured by four-point scale corresponding to non, mild, moderate to severe and was analysed dichotomously as non-mild vs. moderate–severe.
Participants reported symptoms and illnesses were reviewed by the authors of this manuscript to exclude any potential major illnesses reported as active, recurrent or not completely resolved, as this may be an alternative explanation for symptoms. Other diagnoses leading to exclusion include, but not limited to the following: thyroid-related diseases, high BMI, diabetes, insomnia, cardiovascular disease, autoimmune diseases or malignancies. To be included in this study, participants were required to fulfil the Fukuda case definition [3]. To fulfil this criteria fatigue was required to be present for at least six months leading to a significant disruption to daily and vocational activities. Additionally, this fatigue must have been accompanied by at least four of the following symptoms: (i) post-exertional malaise; (ii) cognitive difficulties; (iii) headache; (iv) sore throat; (v) muscle pain; (vi) multi-joint pain; (vii) unrefreshing sleep and (viii) tender lymph nodes. Accompanying symptoms should not have preceded the onset of fatigue and also be persistent or recurring for at least 6 months.

General population scores were obtained from the Australian Bureau of Statistics 1995 National Health Survey [13]. This survey presents an overview of health status (e.g. prevalence of disease) and factors which may influence health (e.g. smoking, exercise). The majority of Australians considered themselves as being in good health with 83% reporting their health status as good, very good or excellent. Three-quarters of the population experience one or more long-term condition lasting six months or longer. Common illnesses reported in the general population include asthma (11%), headache (13%), hypertension (10%), short sighted (21%) and arthritis (15%).
The SF-36 health outcomes survey was used to assess HRQoL in ME/CFS patients compared with general population norms for Australians. As reported in Table 3, mean HRQoL scores were significantly reduced in ME/CFS patients across all domains (p < 0.001). Scores were particularly low for limitations due to physical health (4.11 ± 15.1) and energy/fatigue (13.54 ± 13.94).
Table 3
HRQoL scores of ME/CFS compared to general population (mean ± SD)
ME/CFS Myalgic encephalomyelitis/chronic fatigue syndrome, SD standard deviation
aAustralian National Health Survey

While numerous publications have reported on HRQoL outcomes for ME/CFS patients, there is limited literature using Australian patients. All ME/CFS patients included in this investigation met the Fukuda diagnostic criteria for ME/CFS and reported significantly reduced HRQoL outcomes. Lowest scores were obtained from categories including limitations due to physical role and fatigue. Low scores were associated with unemployment, mental cognition, sensory and sleep disturbances, gastrointestinal upset, cardiovascular abnormalities, changes in body temperature and flu-like symptoms. The evidence of this investigation provides confirmation of the negative effects ME/CFS has on HRQoL. Future research should examine the role of ME/CFS symptoms and demographic factors using prospective studies.

Limitations of the study

The limitations of this investigation reported by the authors are as follows: (i) weight and height were self-reported; (ii) medical history, symptom presentation and quality of life responses were self-reported; (iii) Australian population norms used as comparative data were published 25 years ago and (iv) variations of symptom severity were not analysed with quality of life scores.

Availability of data and material

The datasets used and/or analysed during the current study are available from the corresponding author on reasonable request.

All participants provided consent prior to completing the survey reported in this study.
Open AccessThis article is licensed under a Creative Commons Attribution 4.0 International License, which permits use, sharing, adaptation, distribution and reproduction in any medium or format, as long as you give appropriate credit to the original author(s) and the source, provide a link to the Creative Commons licence, and indicate if changes were made. The images or other third party material in this article are included in the article's Creative Commons licence, unless indicated otherwise in a credit line to the material. If material is not included in the article's Creative Commons licence and your intended use is not permitted by statutory regulation or exceeds the permitted use, you will need to obtain permission directly from the copyright holder. To view a copy of this licence, visit http://​creativecommons.​org/​licenses/​by/​4.​0/​. 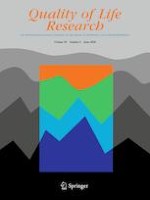 Mild cognitive impairment and quality of life in the oldest old: a closer look

Quality of life following road traffic injury: the impact of age and gender

Capability instruments in economic evaluations of health-related interventions: a comparative review of the literature