Ninety-five YA (18–30 years) with bleeding disorders (78 men; mean 24.7 years, SD 3.5) and 17 women (mean 25.1 years, SD 3.8) participated and completed the Pediatric Quality of Life Inventory Young Adult version, the Course of Life Questionnaire, and the Rosenberg Self-Esteem Scale. Differences between patients with bleeding disorders and their peers, and between hemophilia severity groups, were tested using Mann–Whitney U tests.

The term bleeding disorder refers to a deficiency of the blood clotting system, in which bleeding is prolonged and excessive. Hemophilia A and B and von Willebrand (VWD) are the most common bleeding disorders identified [1]. Hemophilia is X-linked; women are carriers and men are affected. Symptoms of hemophilia are spontaneous and posttraumatic bleeds [2]. Other inherited bleeding disorders, such as VWD, affect men and women. For those, mildly affected patients may suffer from frequent nosebleeds and bruises, while patients with a more severe type may have symptoms similar to those of hemophilia [1]. For women with bleeding disorders, heavy menstruation and postpartum bleeding are common [3].
Mid previous century people with bleeding disorders could only be treated with whole blood or fresh plasma obtained from donors [4]. Most people affected by severe hemophilia died in childhood or in early adulthood [4, 5]. Since the 1980s, as a result of the hepatitis and human immunodeficiency virus (HIV) crises that occurred in Western Europe and the US due to contaminated blood products, safe plasma concentrates of coagulation factors have been produced, and genetically engineered factors led to the industrial production of factor products [2, 4, 6]. Prophylactic treatment was used in order to prevent bleeding and joint damage, ultimately allowing patients to maintain a near normal lifestyle [7].
Despite the available adequate treatment, patients with bleeding disorders still endure difficulties and impairments in daily life, such as hospital visits, frequent injections, and limited participation in (sport) activities [8]. A vulnerable group of patients with bleeding disorders are adolescents and young adults (YA). Transition into adulthood is a critical phase for all children, but growing up with a bleeding disorder brings additional challenges compared with healthy children; acceptance of the limitations of the bleeding disorder, the shift from parental care to self-care, the move from a pediatric to an adult treatment facility, the search for employment that provides adequate medical insurance, or starting a family [9, 10]. Adolescents with bleeding disorders usually start with learning self-infusion around the age of eleven, a procedure which involves complex self-management skills [11, 12]. Despite the advantages of being able to provide care at home (e.g., less hospital visits, more independence), the large responsibility for management of the bleeding disorder is burdensome, especially for patients with hemophilia [13, 14].
During childhood, psychosocial care in the Netherlands is extensive for children with bleeding disorders [15], to prepare them for the transition period. Patients are expected to be independent and fully responsible for their own treatment when they are 18 years making the transition to adult healthcare challenging. Research in YA with hemophilia in Canada showed that YA have more joint disease and slightly worse HRQOL with regard to physical functioning and pain than their younger counterparts and healthy peers [16]. On top of that, research has demonstrated that the mean age of YA for complete self-management and responsibility is not reached until they are 22 years [11].
To identify what elements are relevant and impact daily life of YA (ages 18–30 years) with bleeding disorders, we conducted a foregoing qualitative study. Focus groups revealed that, despite growing up in this era and in a developed country with adequate treatment available, YA still do experience obstacles and issues in daily life with regard to their treatment and condition [17]. For example, being autonomous (in relation to parents, travel, sports, professionally), as well as development of self-esteem (illness perception, acceptance, and being able to pursue ambitions as much as healthy peers), were identified as major issues [17].
These qualitative results have led us to conceive the current study, in which we aim to quantify our findings in a larger group of YA with bleeding disorders. By administering validated questionnaires we can capture the themes retrieved from the focus groups, in a larger sample of YA with bleeding disorders. By comparing them to the peers from the general population, we hope to gain insight into the HRQOL, psychosocial development, and self-esteem of YA with bleeding disorders. Furthermore, in this study, we will examine the influence of severity of hemophilia on these outcomes in YA men with hemophilia, as this is the largest group.

After approval by the Medical Ethics Committees of the Academic Medical Centre, invitational letters, including login codes for online questionnaires, were sent out between May and October 2015 to the eligible patients of the medical centers and to members of the DHPSYA. To recruit additional respondents, the DHPSYA emailed their members, and posted an online call for participation on their website and Facebook page. Informed consent was obtained from all participants.

The Dutch version of the Pediatric Quality of Life Inventory generic core scales young adult version (PedsQL_YA) was used [20, 21]. The PedsQL_YA is a generic self-report HRQOL instrument developed for YA aged 18–30 years and contains 23 items in four scales; physical health (eight items), emotional functioning (five items), social functioning (five items), and work/school functioning (five items). A psychosocial health scale score and a total scale score can be computed. Answers are divided over a 5-point Likert scale, consisting of the options ‘never’ (0) to ‘almost always’ (4). Each answer is reversed scored and rescaled to a 0–100 scale. Higher scores on the PedsQL_YA indicate better reported HRQOL. The validity and reliability of the PedsQL scales are good [21]. The internal consistencies (Cronbach’s alpha) in our sample ranged from .72 (social functioning) to .90 (total scale). A norm group of 649 YA peers from the Dutch population (18–30 years), healthy and with chronic illnesses, was available [21].

The Course of life questionnaire (CoLQ) was used to assess the psychosocial developmental trajectory retrospectively (course of life; CoL) [18, 19]. The CoLQ has 74 items in five scales, concerning behaviors that are characteristic of certain age stages, developmental tasks, and the limitations patients might encounter when growing up with a chronic illness. We used three scales of the CoLQ that covered psychosocial development: development of autonomy (six items, score 6–12), social development (12 items, score 12–24), and psychosexual development (four items, score 6–12). A higher score on the scales indicates the accomplishment of more developmental milestones and therefore a more favorable course of life [19]. The validity and the test–retest reliability of the CoLQ scales are good [18, 19]. The internal consistencies (Cronbach’s alpha) in our sample ranged from 0.48 (development of autonomy) to 0.77 (psychosexual development). A recently updated norm group of 655 YA peers from the general Dutch population (18–30 years) was available.

The Rosenberg self-esteem scale (RSES) was used to assess self-esteem [22]. The RSES measures the self-acceptance aspect of self-esteem or the overall sense of being capable, worthwhile, and competent. The RSES is a self-administered questionnaire with 10-items on a 4-point scale, ranging from one (strongly agree) to four (strongly disagree), with possible scores ranging from 10 to 40 [22]. A higher score indicates a higher self-esteem. The internal consistency (Cronbach’s alpha) in our sample was 0.80. A norm group of 1002 YA peers (18–30 years) was available [23].

The Statistical Package for Social Sciences (SPSS) version 23.0 was used for all statistical analyses [24]. First, preparatory analyses were performed: calculation of internal consistencies (Cronbach’s alpha), computing of scale scores, and the distributions of scale scores were considered.
Next, descriptive analyses were performed to describe the sample. Demographic characteristics of our sample and the norm groups or peers were compared (age, gender, ethnicity, education, employment, and marital status) using χ 2-tests for categorical data and t tests for continuous data.
Differences on the PedsQL scale scores, CoLQ scales, and RSES between the patients with bleeding disorders and their peers were analyzed with Mann–Whitney U tests. Differences on the scale items of the CoLQ, which represent the achievement of the individual milestones, were analyzed with χ 2-tests. To adjust for multiple testing, we used a Bonferroni correction for the PedsQL YA (0.05/6 = 0.008) and CoLQ scale scores (0.05/3 = 0.017) and as well as for the individual milestones (autonomy: 0.05/6 = 0.008, social development: 0.05/12 = 0.004, and psychosexual development: 0.05/4 = 0.013).
Since hemophilia affects primarily men, the sample of YA with bleeding disorders had a significantly higher percentage (p < 0.01, 82%) of men than the peer groups (49%). In addition, bleeding disorders have a different impact on men and women, and therefore we analyzed the outcomes for gender separately. Since bleeding disorders other than hemophilia have a less clear distinction in severity, differences between YA men with severe and non-severe hemophilia were analyzed only, using Mann–Whitney U tests.
For the results of the Mann–Whitney U tests, effect sizes (r) were calculated by dividing the Z-scores by the square root of the sample size. Effect sizes up to 0.1, 0.3, and 0.5 were considered to be small, moderate, and large, respectively [25].

YA men with bleeding disorders reported significantly lower HRQOL on the total scale, physical health scale, and school/work functioning scale in comparison to healthy men on the PedsQL_YA, with small effect sizes (see Table 2). There were no differences found between HRQOL of YA with bleeding disorders and HRQOL of peers with chronic illnesses. YA men with severe hemophilia (median 81.25, mean 78.86, SD 19.39) reported lower physical functioning than men with non-severe hemophilia (median 93.75, mean 93.06, SD 7.21, p < 0.01, r = 0.45) on the PedsQL_YA. HRQOL scores did not differ on the other PedsQL_YA scales between severity groups (data not shown).
The HRQOL of YA women with bleeding disorders did not differ significantly from their healthy or chronically ill peers.
Table 2
PedsQL scale scores and differences between young adults with bleeding disorders and the PedsQL norm groups
Higher scores indicate better HRQOL
N number, M mean, SD standard deviation
* Difference at p < 0.008, adjusted for multiple testing
a Most common conditions chronically ill sample were: asthma (34.3%), psychiatry (10.9%), gastro enterology (10.2%), and skin disease (5.8%)

This study was funded by an unrestricted research grant from Pfizer Pharmaceuticals.

All authors declare that he/she has no conflict of interest.

Informed consent was obtained from all individual participants included in the study.
Open AccessThis article is distributed under the terms of the Creative Commons Attribution 4.0 International License (http://​creativecommons.​org/​licenses/​by/​4.​0/​), which permits unrestricted use, distribution, and reproduction in any medium, provided you give appropriate credit to the original author(s) and the source, provide a link to the Creative Commons license, and indicate if changes were made.
vorige artikel The relationship of five boarding school experiences and physical health status among Northern Plains Tribes
volgende artikel How is weight stigma related to children’s health-related quality of life? A model comparison approach
insite
INHOUD
share
DELEN 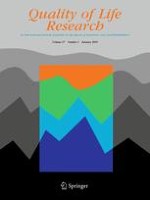 Measuring what matters MOST: validation of the Measure of Ovarian Symptoms and Treatment, a patient-reported outcome measure of symptom burden and impact of chemotherapy in recurrent ovarian cancer

How is weight stigma related to children’s health-related quality of life? A model comparison approach