Improvements in survival rates for childhood cancers have contributed to an increased focus on late effects of treatment among long-term survivors (≥ 5 years post diagnosis) [ 1]. Although serious problems may occur during cancer therapy or soon after, the majority of problems do not become clinically apparent until years after the cancer has been cured [ 2]. This highlights the need for young adult (YA) survivors of childhood cancers to be evaluated for long-term effects when transitioning into adult-centred health care [ 3]. Nevertheless, the majority of YA survivors do not receive risk-based survivorship care to assess physical and psychosocial late effects [ 4].
Long-term follow-up studies of childhood cancer survivors suggest that although most adult survivors are psychologically healthy, certain subgroups are at risk for significant psychological distress (distress), including symptoms of depression, anxiety, and somatization [ 5– 7]. Zeltzer et al. [ 6] found that risk factors for distress and poor HRQOL were female gender, lower educational attainment, unmarried status, lower household income, unemployment, lack of medical insurance, having a major medical condition, and treatment with cranial radiation. Compared to the paediatric and older adult populations, YA survivors may have different psychosocial concerns, typically related to establishing identity, and separating from parents and issues regarding career or employment decisions and higher education. In addition, health-related concerns about the future, and whether they will be able to establish their own family, as underlined by Zebrack et al. [ 8], may contribute to persistent distress for YA survivors. This increases the need for knowledge on how disease and treatment affect later the psychological functioning as well as health-related quality of life (HRQOL). HRQOL is a multidimensional construct covering physical, emotional, mental, social, and behavioural components of well-being and functioning as perceived by patients [ 9, 10].
Negative psychosocial outcomes and poor HRQOL are associated with female gender [ 6, 7, 11– 14], and worse physical and mental adaptation are associated with older age at the time of assessment [ 12– 14]. Individuals diagnosed between the age of 15 and 20 are nearly twice as likely to use antidepressant medication as compared to individuals diagnosed before the age of 5 [ 15], which may suggest an increased risk of mental health conditions among YA survivors [ 16, 17]. On the other hand, YA survivors may show considerable resilience and are more likely to report better social functioning and HRQOL compared with controls, despite diminished educational attainment and perceived social support [ 18]. Tremolada et al. [ 18] found that survivors demonstrated an even better perception of their lives than controls, and, according to the authors, this finding illustrates a profile of relatively good psychological health and resilience in paediatric cancer survivors. The results indicate that YAs can have normal development in health perceptions compared to their peers [ 18]. Young people who are able to accept and cope with cancer may gain greater appreciation of life as a result of their illness experience, may mature faster than their peers, and can become better equipped emotionally to handle the everyday challenges of life [ 8, 19].
This study aims to examine late effects in YA survivors of childhood cancer on self-reported HRQOL and distress and the association of those effects with treatment modalities, education, and demographic factors. First, we compare survivors and controls in levels of HRQOL and distress, differences in symptoms of distress (scores above cut-off), as well as gender differences in these constructs. Second, we investigate whether cranial radiation treatment, education, and demographic factors are associated with HRQOL and distress for this population of cancer survivors. It is hypothesized that no significant differences will be found between survivors and controls on HRQOL but survivors will report poorer physical health and higher levels of distress, including being more likely to score above the cut-off for distress. Female survivors are expected to have lower HRQOL and higher distress compared to female controls. Age, gender, lower educational attainment, lower household income, and treatment with cranial radiation are expected to be significant predictors of HRQOL and distress. In addition, to investigate moderation effects, it is hypothesized that gender will interact with education and treatment in predicting HRQOL and distress, where female survivors report poorer HRQOL and distress. Moreover, it is hypothesized that treatment with cranial radiation in interaction with education will predict poorer HRQOL and distress. To the best of the authors’ knowledge, this study contributes to the field of research by being the first to investigate these questions in a Norwegian YA population of childhood cancer survivors.

The participating sample was derived from a previous study where participants were recruited through the Cancer Registry of Norway (CRN) by the research institution the Foundation for Scientific and Industrial Research at the Norwegian Institute of Technology (SINTEF). The birth cohorts were from 1980 to 1992. Age at survey was 18 years and above. All cancer diagnoses included in statistics from Cancer in Norway [ 20] were included. Of 536 survivors invited, 230 agreed to participate (42.9% response rate). In the present study, we included survivors based on the following main inclusion criteria: a follow-up time from diagnosis ≥ 5 years, and diagnosed ≤ 21 years of age and whose age at assessment was ≤ 29. Participant survivors included 56 females (61.54%) and 35 males (38.46%), with a mean age of 24.71 ± 2.77 years (range 20–29) (Table  1). Survivors were an average of 9.21 years ( SD = 3.80) from diagnosis, with a mean age at diagnosis of 15.50 ( SD = 3.83) years, diagnosed during 1991–2007 (Table  2). Controls were students recruited through lectures at the Norwegian University of Science and Technology (NTNU), and consisted of first through third year bachelor and clinical program psychology students, and fourth grade master degree teacher students, excluded by earlier or ongoing illness. The control group data were collected in January 2016. After matching with the survivor cohort on age (≤ 29 at assessments), the control group included 223 participants, 145 females (65.0%) and 78 males (35.0%), with a mean age 24.91 ± 2.05 years (range 20–32). There were no significant differences in gender, age, or perceived economic situation between survivors and controls.
Table 1
Demographic characteristics and differences between survivors and controls
Table 2
Cancer characteristics

The survivor group data were collected during autumn 2012, with seven hospitals in Norway participating. Patient records were sent from the hospitals to CRN, who sent questionnaires to respondents. Respondents were informed that the CRN was used to identify them, and were instructed to return their questionnaires to SINTEF. Data were anonymized prior to statistical analysis. The study was approved by the Regional Committee for Medical and Health Research Ethics (2011/2647 and 2015/2218).

Questionnaires and selected items used in the present study were based on earlier individual interviews with cancer survivors conducted in 2009. Seven cancer survivors, mean age 23.4 (range 18–25) years, all from the youth group of the Norwegian Cancer Society participated in the interview conducted by SINTEF.
Demographic questions included items regarding gender, age, living arrangements, economic situation (a lower value indicates better perceived situation), education, main occupation. For controls, one question regarding severe illness was added. Treatment modalities were self-reported by survivors, who indicated which of seven different treatments they had received.
A young adult version of the Pediatric Quality of Life inventory (PedsQL™) 4.0, originally developed by Varni et al. [ 21], was used to measure psychosocial health of AY cancer survivors. Structure and scales are described elsewhere [ 22]. The young adult version (18–25 years) was translated and linguistically validated in 2011. The validation of the adolescent version, practically identical to the young adult version, showed good psychometric properties [ 23]. PedsQL items were reverse-scored and linearly transformed on a scale ranging from 0 to 100, where higher scores indicate better HRQOL. Scale scores were computed as the sum of items divided by the number of items answered (this accounts for missing data) [ 22]. Cronbach’s alphas for scale internal consistency were between 0.89 and 0.92 for survivors and 0.82 and 0.90 for controls on subscales and main scale PedsQL; these findings are considered satisfactory [ 23].
The Hopkins Symptom Checklist-10 (HSCL-10) covers depressive and anxiety symptoms with five items each. Each item is rated on a scale from 1 (not at all) to 4 (extremely) [ 24]. Average item score was calculated by dividing the total score by the number of items answered. Records with three or more missing items were excluded, resulting in exclusion of one (1.10%) of total participants. The cut-off point for distress was set to 1.85 as recommended by Strand et al. [ 25]. A higher value on HSCL indicates higher level of reported distress. On HSCL, Cronbach’s α = 0.91 for cancer survivors and α = 0.88 for controls were ≥ than reported by Strand et al. [ 25].

The Statistical Package for the Social Sciences (SPSS, version 23) was used to conduct statistical analyses. Two-sided p values < .05 were considered statistically significant. Cohen’s d and odds ratios were used to assess effect size. Regarding Cohen’s d, where homoscedasticity could not be assumed, the s (sample std. deviation) of the control group was used to calculate effect size, as recommended by Field [ 26]. Descriptive analyses were conducted. Independent samples t test and Pearson’s Chi-square test in crosstabs were used to estimate sociodemographic differences between survivors and controls. Cronbach’s alpha (α) was used to assess internal consistency of the questionnaires. Independent samples t tests, Pearson’s Chi square, ANOVA, and hierarchical stepwise regression analysis was used to investigate the hypotheses.

Norwegian survivors report poorer physical HRQOL, but not poorer total or psychosocial HRQOL, than controls. Nor do they report higher distress than controls. This finding could represent an effect of resilience, positive growth, or lowered self-expectations. Despite showing no significant differences in levels of distress, survivors have higher odds of scoring above the cut-off for distress, and the impact of high levels of distress on HRQOL seems to be stronger for survivors than for controls. In line with earlier research, we found females to be an at-risk group. Female survivors scored significantly lower on physical HRQOL and had higher odds of being distressed than did female controls. Age (only for HRQOL), gender, education, and perceived economic situation significantly predict HRQOL and distress. In addition, survivors treated with cranial radiation may be particular vulnerable in combination with low education regarding HRQOL, and should be investigated in further research with longitudinal studies. Insights from this study can be used to identify at-risk survivors so that appropriate care can be provided.

This study was supported by grants from the Liaison Committee for Education, Research and Innovation in Central Norway, the Joint Research Committee between St. Olavs Hospital and Faculty of Medicine and Health Science, NTNU, and the Norwegian Cancer Organization.

The study was approved by the Regional Committee for Medical and Health Research Ethics (2011/2647 and 2015/2218).
Open AccessThis article is distributed under the terms of the Creative Commons Attribution 4.0 International License ( http://​creativecommons.​org/​licenses/​by/​4.​0/​), which permits unrestricted use, distribution, and reproduction in any medium, provided you give appropriate credit to the original author(s) and the source, provide a link to the Creative Commons license, and indicate if changes were made. 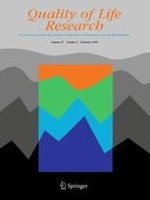 Mental health, loneliness, and illness perception outcomes in quality of life among young breast cancer patients after mastectomy: the role of breast reconstruction

Effects of a 9-month resistance training intervention on quality of life, sense of coherence, and depressive symptoms in older adults: randomized controlled trial

Examining the effect of peer helping in a coping skills intervention: a randomized controlled trial for advanced gastrointestinal cancer patients and their family caregivers