» Toegang tot de volledige tekst krijgen
Belangrijke opmerkingen
Disclaimer: The findings and conclusions in this report are those of the authors and do not necessarily represent the official position of the Centers for Disease Control and Prevention.

To examine the magnitude of differences in health-related quality of life (HRQOL) by body mass index (BMI) in a population-based sample of United States adolescents overall and by sex, and to provide national prevalence estimates of reported HRQOL outcomes for not only obese and overweight but also underweight adolescents.

Substantially, significant differences in some domains of HRQOL are found between above normal-weight and normal-weight US adolescents. This relationship between BMI and HRQOL is robust and observed among both boys and girls. 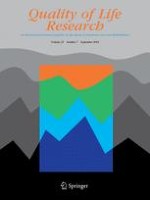 Measurement properties of the Client-centered Care Questionnaire (CCCQ): factor structure, reliability and validity of a questionnaire to assess self-reported client-centeredness of home care services in a population of frail, older people

Enacted and internalized stigma and quality of life among people with HIV: the role of group identity

Translation, cross-cultural adaptation and validation of the Bulgarian version of the Dizziness Handicap Inventory