To determine the genetic relationship between head circumference (HC) and Autism Spectrum Disorders (ASDs). Twin pairs with at least one twin with an ASD were assessed. HCs in affected and unaffected individuals were compared, as were HC correlations in monozygotic and dizygotic pairs. 404 subjects, ages 4–18, were included. 20 % of males and 27 % of females with an ASD had macrocephaly. Unaffected co-twins showed similar rates (16 % of males and 22 % of females). Statistical analysis revealed no significant difference in HCs between affected and unaffected twins. Twins with ASDs and unaffected co-twins have similar HCs and increased rates of macrocephaly. Correlations demonstrated partial inheritance of HCs. Thus, macrocephaly may represent an endophenotype in ASDs.
vorige artikel Acquisition of Multiple Questions in the Context of Social Conversation in Children with Autism
volgende artikel ERP Correlates of Recognition Memory in Autism Spectrum Disorder 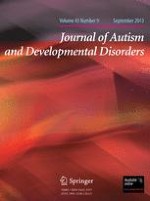 Brief Report: Is Cognitive Rehabilitation Needed in Verbal Adults with Autism? Insights from Initial Enrollment in a Trial of Cognitive Enhancement Therapy