Global–local processing was examined in high-functioning children with autism and in groups of typically developing children. In experiment 1, the effects of structural bias were tested by comparing visual search that favored access to either local or global targets. The children with autism were not unusually sensitive to either level of visual structure. In experiment 2 a structural global bias was pitted against an implicit task bias favoring the local level. Children with autism were least sensitive to the structural global bias but showed greater sensitivity to the implicit task bias. This suggests that autism is associated with differences in the executive control processes used to guide attention to either the global or local level, and strategies may be more “data driven”.
vorige artikel The Microgenesis of Global Perception in Autism
volgende artikel Attention to Eyes and Mouth in High-Functioning Children with Autism 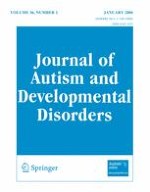