Understanding whether and how the absence of positive relationships may predict longer-term physical health outcomes is central to building a working conceptual model of the interplay of social and physical development across the lifespan. This study sought to examine the extent to which difficulties establishing positive social relationships from adolescence onward serve as long-term predictors of low adult vagal tone, which in turn has been linked to numerous long-term health problems. A diverse community sample of 141 individuals was followed via multiple methods and reporters from age 13 to 29. Across this span, social relationship quality was assessed via close friend and peer reports, observations of romantic interactions, and self-reported romantic relationship satisfaction. A range of potential personality and functional covariates was also considered. Vagal tone while at rest was assessed at age 29. Adult vagal tone was predicted across periods as long as 16 years by: adolescents’ difficulty establishing themselves as desirable companions among peers; early adults’ inability to establish strong close friendships; and lack of warmth in romantic relationships as an adult. Poor early adult friendship quality statistically mediated the link from adolescent peer difficulties to adult vagal tone. A range of potential confounding factors was examined but was not linked to vagal tone. Within the limits of the correlational design of the study, robust connections between adult vagal tone and social relationship quality from adolescence onward suggest at least a possible mechanism by which relationship difficulties may get ‘under the skin’ to influence future physiological functioning.
vorige artikel Internet-delivered cognitive behaviour therapy for chronic health conditions: self-guided versus team-guided
volgende artikel Day-level associations of physical activity and sedentary time in mother–child dyads across three years: a multi-wave longitudinal study using accelerometers 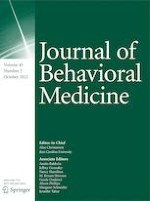 Medical avoidance among marginalized groups: the impact of the COVID-19 pandemic