Attention deficit hyperactivity disorder (ADHD) is a common, complex and highly heritable disorder, characterised by inattentive, impulsive and overactive behaviour. Evidence for the heritability of ADHD measures in twin population samples has come from the analysis of total scores that combine inattentive and hyperactive–impulsive symptoms subscales. This study investigated, in a community sample, the aetiology of ADHD-like traits and the aetiological overlap between the two dimensions that define the ADHD disorder.

These findings suggest that many genes associated with the hyperactivity–impulsivity dimension will also be associated with the inattentive dimension but that there is significant genetic heterogeneity as well. These results provide genetic support for combining the two behavioural dimensions that define ADHD, but also suggest that some symptom-specific genes will also be identified.
vorige artikel Maintenance of Treatment Gains: A Comparison of Enhanced, Standard, and Self-directed Triple P-Positive Parenting Program
volgende artikel Person–Group Dissimilarity in Involvement in Bullying and Its Relation with Social Status 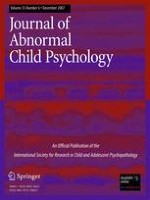 Are Motor Inhibition and Cognitive Flexibility Dead Ends in ADHD?

Joint Attention and Attachment in Toddlers with Autism