Research on the academic adjustment of immigrant adolescents has been predominately conducted in large cities among established migration areas. To broaden the field’s restricted focus, data from 172 (58% female) Asian American adolescents who reside within a non-traditional or emerging immigrant community in the Southeastern US were used to examine gender differences in academic adjustment as well as school, family, and cultural variables as potential mediators of gender differences found. Results suggest that girls report significantly higher educational goals, intrinsic academic motivation, and utility value of school compared to boys. These gender differences are statistically mediated by ethnic exploration and family processes, most prominently, family respect. School connectedness and perceived discrimination are also associated with academic adjustment at the bivariate level, suggesting that academic success may be best promoted if multiple domains of influence can be targeted. 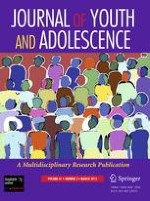 What Makes Students Engaged in Learning? A Time-Use Study of Within- and Between-Individual Predictors of Emotional Engagement in Low-Performing High Schools

Peer Selection and Socialization in Adolescent Depression: The Role of School Transitions

Beyond Participation: The Association Between School Extracurricular Activities and Involvement in Violence Across Generations of Immigration

The Pivotal Role of Adolescent Autonomy in Secondary School Classrooms