Gender-specific pathways of conduct problems (CP) from toddlerhood have received little attention. Using a nationally representative sample of UK children born in 2000–2001 (6458 boys and 6340 girls), the current study (a) identified subgroups of CP pathways separately for boys and girls from ages 3 to 11 and (b) examined early precursors (pregnancy to 9 months) of these trajectories. Group-based trajectory models identified four distinct trajectories for both boys and girls: each characterized as ‘low’; ‘early-onset, desisting’; ‘early-onset, persistent’ and ‘school-onset’. This suggests that the taxonomic framework developed to conceptualise childhood-onset CP among males is also applicable to females, though needing some revision to capture heterogeneity identified during early and middle childhood. We also found significant precursors of the different trajectory groups with some variation by gender. Early socioeconomic deprivation was a significant risk factor of the early-onset pathways among both genders, but played no significant role for ‘school-onset’. Childhood-onset trajectories of boys, but not girls, were predicted by parenting attitudes and behaviour. 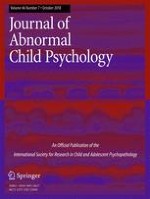 The Development of Latent Dimensions of Psychopathology across Early Childhood: Stability of Dimensions and Moderators of Change