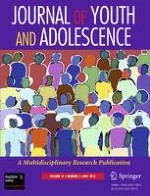 Invited Commentary: Seeking a Coherent Strategy in our Response to Homeless and Street-Involved Youth: A Historical Review and Suggested Future Directions

The Role of Empowerment in Youth Development: A Study of Sociopolitical Control as Mediator of Ecological Systems’ Influence on Developmental Outcomes