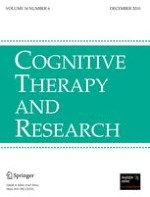 The Impact of Experiential Avoidance on the Inference of Characters’ Emotions: Evidence for an Emotional Processing Bias