The current study investigated gender differences in types and correlates of aggression among 150 adjudicated youth (M age = 15.2, SD = 1.4). In cluster analysis, consistent with past studies, one aggressive group characterized by moderate levels of reactive aggression and one characterized by high levels of proactive and reactive aggression emerged and these patterns were consistent across gender. For both boys and girls, the combined proactive/reactive aggression cluster showed the greatest levels of aggression, impulsivity, and callous-unemotional traits, supporting a severity over a typology model of proactive and reactive aggression. Girls displayed significantly higher rates of physical and relational aggression than boys. Girls were highly aggressive toward both girls and boys, whereas boys were highly aggressive only toward other boys. Girls also showed multiple indications of severity and emotionality, indexed by higher rates of negative affect, anxiety, distress about social provocations, and empathy. 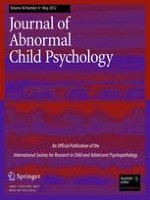