Cognitive theories propose that aggression is associated with specific patterns of attention to social cues, and suggest that cognitive biases in attention and interpretation are interrelated, The current study tested whether these attention patterns can be altered using a single session of a novel gaze-contingent cognitive bias modification paradigm (CBM-A) and assessed the impact of this on interpretation bias, aggressive behavior and mood. University students (18–31 years) were randomly assigned to either a single session of positive training (n = 40) aimed at increasing attention to pro-social cues, or negative training (n = 40) aimed at increasing attention to negative cues. Results showed that the positive training indeed resulted in an increase in pro-social attention bias, while the negative training seemed not to have an effect on attention to negative cues. Both groups did not differ on their interpretations, mood levels, self-reported aggression and behavioral aggression. Findings suggest that this novel gaze-contingent CBM-A paradigm can indeed alter biased gaze processes, but may not impact interpretations, aggression and mood. The current study was conducted in a non-clinical sample, further research with a clinical aggressive sample, such as forensic patients is necessary to further explore these issues. 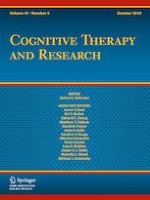 4/20 Cannabis Use is Greater than Other High-Risk Events: Identification of Psychosocial Factors Related to 4/20 Use