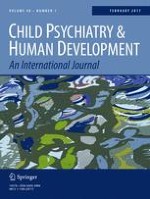 Cognitive Bias as a Mediator in the Relation Between Fear-Enhancing Parental Behaviors and Anxiety Symptoms in Children: A Cross-Sectional Study