The literature on typically developing siblings of individuals with autism spectrum disorder (ASD-Sibs) provides inconsistent results, with some studies reporting ASD-Sibs are more likely to have negative outcomes than comparison groups, and others reporting no significant differences. Therefore, the purpose of this study was to meta-analytically aggregate study effect sizes to more accurately calculate the degree to which ASD-Sibs function similarly or differently compared to siblings of people who do not have ASD. Studies were eligible for inclusion if they had a sample of ASD-Sibs older than 5; reported on emotional, psychological, behavioral, or social functioning; and provided information necessary for calculating relevant effect sizes. Results from 69 independent samples indicated that ASD-Sibs have significantly more negative outcomes than comparison groups overall (g = − 0.26); specific areas of functioning in which ASD-Sibs fared worse include internalizing behavior problems, psychological functioning, beliefs, social functioning, and the sibling relationship, but no significant differences in adjustment, attention/hyperactivity, externalizing behavior problems, coping, or family functioning. Noteworthy sub-areas of functioning in which ASD-Sibs also fared worse included beliefs about disability (g = − 0.56), anxiety symptoms (g = − 0.25), and depression symptoms (g = − 0.36). In terms of comparison group, ASD-Sibs had significantly lower functioning than siblings of individuals with other intellectual and developmental disabilities (g = − 0.31), including Down syndrome (g = − 0.40) and siblings of individuals without any disabilities (g = − 0.31). Clinicians and service providers should work to ensure that ASD-Sibs are included in family interventions and support strategies, and researchers should further explore individual differences that may relate to enhanced or impaired functioning in ASD-Sibs. 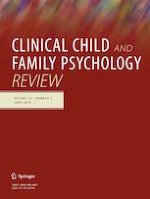 Technology Delivered Interventions for Depression and Anxiety in Children and Adolescents: A Systematic Review and Meta-analysis

The Role of Irritability in the Treatment of Behavior Disorders: A Review of Theory, Research, and a Proposed Framework