Early identification of autism spectrum disorder (ASD) is regarded as crucial for swift access to early intervention and, subsequently, better outcomes later in life. However, current instruments miss large proportions of children who later go on to be diagnosed with ASD, raising a question of what these instruments measure. The present study utilized data from the Norwegian Mother, Father, and Child Cohort Study and the Autism Birth Cohort study to explore the subsequent developmental and diagnostic characteristics of children raising developmental concern on the six-critical discriminative item criterion of the M-CHAT (DFA6) at 18 months of age (N = 834). The DFA6 identified 28.8% of children diagnosed with ASD (N = 163), but 4.4% with language disorder (N = 188) and 81.3% with intellectual disability (N = 32) without ASD. Scoring in the «at-risk» range was associated with lower IQ, impaired functional language, and greater severity of autism symptoms whether children had ASD or not. 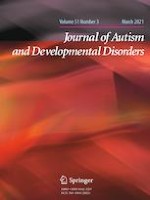 Correction to: Longitudinal Differences in Response to Name Among Infants Developing ASD and Risk for ADHD

The Emergence of Autism Symptoms Prior to 18 Months of Age: A Systematic Literature Review

Concurrent Validity of the Modified Checklist for Autism in Toddlers (M-CHAT): Socio-cognitive and Verbal Skills in 18-Month-Old Infants

Understanding How Parents Make Meaning of Their Child’s Behaviors During Screening for Autism Spectrum Disorders: A Longitudinal Qualitative Investigation