Several studies have examined the neural correlates of mood-related emotional processing in depression, showing a greater reduction of activity in the rostral anterior cingulate cortex (rACC) in response to pleasant relative to unpleasant stimuli in depressed individuals, and the opposite pattern in healthy controls. The present study aimed at examining whether frontal theta activity—an electrophysiological measure of rACC activity—could be a reliable EEG correlate of mood-related emotional processing in individuals with dysphoria. To this end, the EEG was recorded in 27 individuals with dysphoria and 29 individuals without dysphoria during an emotional imagery task, including pleasant, neutral and unpleasant scripts. Self-reported valence, arousal and vividness, and changes in frontal theta activity were measured during the task. Frontal theta activity was more reduced from baseline to the imagery of pleasant relative to unpleasant scripts in the group with dysphoria, whereas the opposite pattern of reduction was noted in the group without dysphoria. In addition, more severe depressive symptoms were correlated with greater reduction in frontal theta activity in response to pleasant, but not neutral and unpleasant, scripts. No differences between groups in subjective ratings were noted. Consistent with the key role of rACC activity in depression-related emotional dysregulation, these findings suggest that frontal theta activity may be an EEG correlate of mood-related emotional processing in dysphoria. The current study also suggests that dysphoria is more likely to be associated with abnormal processing of pleasant rather than unpleasant stimuli.
vorige artikel Psychometric Properties of a Social Skills Assessment using a Virtual Environment
volgende artikel Processing of Ambiguous Facial Affect in Adolescents with Depressive Symptoms Prior to and Following Social Exclusion: The Role of Perceptual Sensitivity and Response Bias 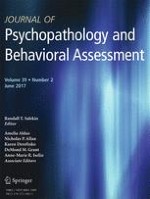