From Action to Interaction: Exploring the Contribution of Body Motion Cues to Social Understanding in Typical Development and in Autism Spectrum Disorders | mijn-bsl Skip to main content
ZOEKEN MENU 1 2 3 4

Two studies investigated whether typically developing children (TD) and children with autism spectrum disorders (ASD) were able to decide whether two characters were communicating or not on the basis of point-light displays. Point-lights portrayed actors engaged or not in a social interaction. In study 1, TD children (4–10 years old; n = 36) grasped social intentions from body language, with a notable improvement around 7/8. In study 2, children with ASD (6–12 years old; n = 12) could categorize the point-light displays at above-chance levels, but performed less efficiently, especially for the social interaction displays, than TD children (matched to chronological and non-verbal mental age, 6–12 years old; n = 24). An action representation deficit is discussed in relation to a social representation deficit and it is suggested that these deficits might be linked to altered maturational process of the mirror system in ASD.
vorige artikel Emotion Recognition and Visual-Scan Paths in Fragile X Syndrome
volgende artikel Sex Differences in the Timing of Identification Among Children and Adults with Autism Spectrum Disorders 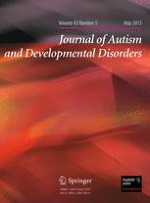 Excess Mortality and Causes of Death in Autism Spectrum Disorders: A Follow up of the 1980s Utah/UCLA Autism Epidemiologic Study

Autism Traits in Individuals with Agenesis of the Corpus Callosum

A Comparison of Social Cognitive Profiles in children with Autism Spectrum Disorders and Attention-Deficit/Hyperactivity Disorder: A Matter of Quantitative but not Qualitative Difference?