The current study examined the level of friendship satisfaction of children with autism spectrum disorder (ASD) and their nominated friends (with and without diagnosis of ASD). A total of 77 target children with ASD and friends from 49 nominated friendships participated in the study. Relatively high levels of friendship satisfaction were reported by both target children and their nominated friends with no overall difference between dyads involving typically developing friends and friends with ASD. Analysis at the individual dyad level showed a high level of agreement on the reported level of satisfaction across the target participants and their friends. Limitations and directions for future research are presented.
vorige artikel Syntax and Morphology in Danish-Speaking Children with Autism Spectrum Disorder
volgende artikel Cross-Cultural Validity of the Social Communication Questionnaire for Adults with Intellectual Developmental Disorder 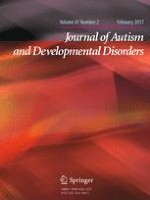 Erratum to: Promoting Expressive Language in Young Children with or At-Risk for Autism Spectrum Disorder in a Preschool Classroom