» Toegang tot de volledige tekst krijgen
Belangrijke opmerkingen
This research was supported by a NIMH NRSA award (F31 MH 70079) to Lance P. Swenson and partially supported by a NIMH grant (R03 MH 63753) awarded to Amanda J. Rose. During the preparation of this paper, Amanda J. Rose was partially supported by NIMH grant R01 MH 073590. We would like to thank Wendy Carlson, Rebecca Schwartz-Mette, and Erica Waller for their assistance with data collection. We also would like to express our appreciation to the school personnel and students who participated in this research.

Some evidence suggests that close friends may be knowledgeable of youth’s psychological adjustment. However, friends are understudied as reporters of adjustment. The current study examines associations between self- and friend-reports of internalizing and externalizing adjustment in a community sample of fifth-, eighth-, and eleventh-grade youth. The study extends prior work by considering the degree to which friends’ reports of youth adjustment are accurate (i.e., predicted by youths’ actual adjustment) versus biased (i.e., predicted by the friend reporters’ own adjustment). Findings indicated stronger bias effects than accuracy effects, but the accuracy effects were significant for both internalizing and externalizing adjustment. Additionally, friends who perceived their relationships as high in positive quality, friends in relationships high in disclosure, and girls perceived youths’ internalizing symptoms most accurately. Knowledge of externalizing adjustment was not influenced by gender, grade, relationship quality, or self-disclosure. Findings suggest that friends could play an important role in prevention efforts. 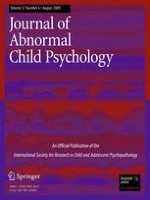 Comorbid Problems in ADHD: Degree of Association, Shared Endophenotypes, and Formation of Distinct Subtypes. Implications for a Future DSM

Are There Stable Factors in Preadolescent Girls’ Externalizing Behaviors?