One of the mindfulness exercises described in the Satipaṭṭhāna-sutta and its parallels concerns the four elements of earth, water, fire, and wind, which stand representative of the qualities of solidity, cohesion, temperature, and motion. Within the ancient Indian setting, the early Buddhist analysis of matter into these four elements can be seen to eschew the two extremes of materialist annihilationism and eternalism; closer inspection also shows that the employment of these elements does not reflect the influence of Brahminical cosmology, as assumed by Alexander Wynne. The ultimate concern of mindful contemplation of the elements is their transcendence, which is to be achieved through cultivating liberating insight into their impermanent and empty nature.
vorige artikel Effects of Length of Mindfulness Practice on Mindfulness, Depression, Anxiety, and Stress: a Randomized Controlled Experiment
volgende artikel Mindfulness and De-automatization: Effect of Mindfulness-Based Interventions on Emotional Facial Expressions Processing 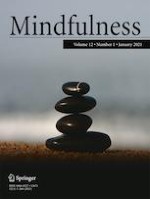 Effects of Length of Mindfulness Practice on Mindfulness, Depression, Anxiety, and Stress: a Randomized Controlled Experiment

The Sound of Silence