Two types of conflict underlie performance in the Stroop task—informational (between the incongruent word and its ink color) and task (between the relevant color-naming task and the irrelevant word-reading task). We manipulated congruent-to-neutral trial ratio in an attempt to reveal whether task conflict can be monitored and controlled in the absence of an informational conflict. In our first experiment, no incongruent trials were included, thus allowing examination of a pure task conflict situation. The results revealed an impressively large facilitation when most of the stimuli were congruent and a smaller yet significant facilitation when most of the stimuli were neutrals. In Experiments 2, exposing participants to incongruent trials during pre-experimental practice (but not during the experimental blocks) slowed down the responses to congruent trials, resulting in a reduced facilitation effect in the mostly congruent condition, and in a negative facilitation in the mostly neutral condition. In our third experiment, we replicated our results, eliminating possible contingency and frequency biases. Overall, our findings show that experiencing, or at least expecting, informational conflict is essential to reveal conflict, while control is recruited through task demands. This challenges previous findings and points out that additional research is needed to clarify the necessity of informational conflict for conflict detection.
vorige artikel Cue-target contingencies modulate voluntary orienting of spatial attention: dissociable effects for speed and accuracy
volgende artikel What makes a smiling face look happy? Visual saliency, distinctiveness, and affect 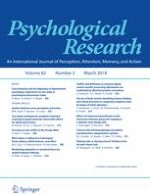 Spatial attention across perception and action